Simple Art is the Best Art. Sixto Rodriguez’s Cold Fact, released in March of 1970 on Sussex, is a nice fit with this maxim. 43 years have passed by, but Cold Fact is still a new release. Why or how? It was an unknown chunk of ephemera (mostly) before Searching for Sugar Man! I just heard Cold Fact for the first time last night, after picking it up on itunes. Yea, it’s a masterpiece. No filler tunes. Comparisons with other greats (Dylan, Donovan, Paul Simon, or James Taylor), are an exercise in futility. Rodriguez is consummately an original!

Genre? Eclectic; folksy, lightly psychedelic, clever, topical lyrics, simple, uncluttered arrangements, and unpretentious vocals. Art is timeless. Why didn’t I hear about it before? This is part of the mystery; really it’s an ace in a sleeve. What makes Pompeii such a beautiful find? Or how ’bout a fresh print of The Wizard of Oz? Is Cold Fact a new manifestation of Carole King’s Tapestry? YES. How ’bout James Taylor’s Sweet Baby James? YES. The Real Donovan? YES, that too! But none of these. 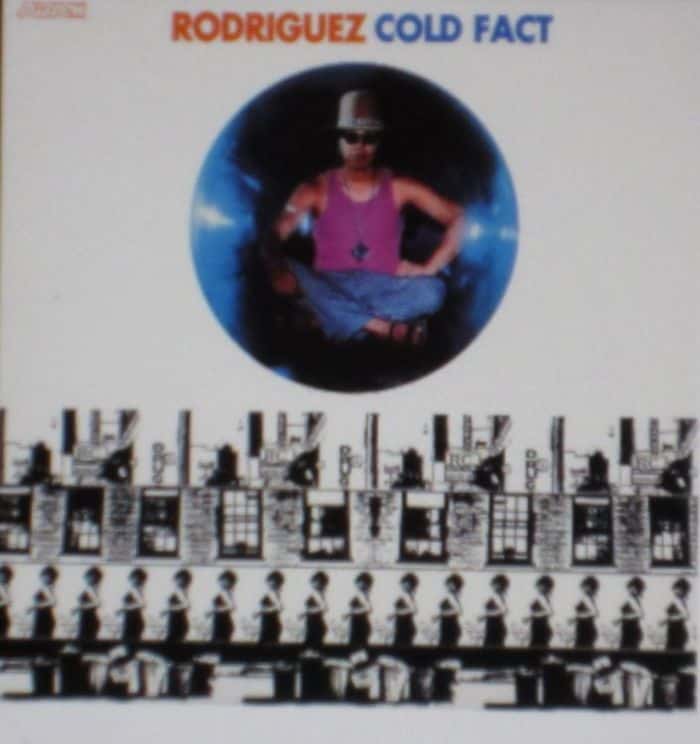 This is why it’s survived; it’s elusively original, the unique DNA of Rodriguez. He’s bumped heads with many of the masters, but has come up with his own vision, in melody, lyric and delivery (arrangements). Hooking up with co-producers Mike Theodore and Dennis Coffey in Detroit (in 1969) was a good move. The songs are varied. Folk morphs to Pop with electric keys, percussion, and reverb soaked vocals (that occasionally pan from left to right). Oh, and xylophone, say it again, xylophone!

Just to gut-shot one Sixto side, Jane S. Piddy; just one section, one chord progression against stream of conscientiousness lyrics laid out with a clear, mellow Nashville Skyline -Dylan delivery. Not angry, but inquisitive, concerned, cautionary, visionary, scolding yet obfuscated by topical/historical twists of limerick (the shimmering ’60s fading into the sunset of pensive reflection – San Francisco, Haight Ashbury, his father, social consciousness, and all that!)

This bonus track Slip Away is wonderful; maybe it was intended for his third record, which never saw the light of day. Sounds like it was recorded in a sewer pipe; very strong track, nice harmonies, chorus/verse contrast, organ perfect, drums up front; gentle, meandering, dreamy pop music. Think Country Joe and the Fish’s Who Am I? “And you can keep your symbols of success, then I’ll pursue my own happiness.” There ya go. Totally SIXTIES!

Material objects will get you nowhere; happiness is in your mind. This message of protest resonated in South Africa first, I’m hearing. Now with Searching for Sugar Man, Rodriguez comes full circle back to the States. Now his records will be recognized here. I’m glad I haven’t seen the documentary yet, since it gives me something else to look forward to: a pristine discovery of Rodriguez, which is the theme of today’s play. I hope Coming from Reality (which is another surprise I’ve never heard) is available in a vinyl edition soon; it’s the way to go!

Rodriguez must be 71 now; glad he didn’t fade before he shines. First three cuts are the best; Sugar Man, Only Good For Conversation, and Crucify Your Mind. Sugar Man uses an oscillator, which gives it an other worldly quality. Other Worldly is a pertinent, catchy phrase for the Miracle Story of slowly emerging fame, ala Rodriguez. True Art has a way of seeing the light of day. Excuse me, while I scoop up more dirt from my archaeological sonic dig. Anyhow, I don’t mind hanging around 1970 too Bad.