As I watched the Hope for Haiti Now telethon Friday night, I began to discern a pattern of remarkable care in the choices of song by the artists. Many of the songs decided on had a universality to them, which was apropos, to the task before us: to raise lots of money for the earthquake victims of Haiti.

Two songs are derived from the inspirational film The Harder They Come, staring Jimmy Cliff as a poverty ravaged Jamaican reggae singer/musician, who turns to a life of crime to make it in the music industry. He never quite breaks out of the cycle of despair, but biblical themes of redemption and hope are hinted at in this milestone of a film. 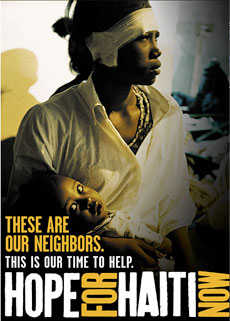 Indeed, many of our most inspiring songs were sung that night; I suddenly realized that these selections were perfect fits for this solemn occasion. Let me see, there was Bridge Over Troubled Water, Let it Be and Lean on Me; all were witnessed with wonderment and all were beautifully played that night.

What I did was to identify seven slightly less well known songs, like Hank Williams’ Alone and Forsaken, and I then proceed to research their origin, find a transcript of the lyrics, then attempt to distinguish its relevance to the Haitian earthquake, and its consequence of hardship.

Here are a few of my words on these seven songs, and if you will, please go to iTunes and purchase it for yourself. Then you can better understand the greatness, the universality of these seven songs.

The Rivers of Babylon (1972) was written by Brent Dowe and Trevor McNaughton of reggae fame, The Melodians. I became very familiar with it when I worked at The Garden Cafe, an early smoothie bar that served tempura vegetables also. We would play the soundtrack to The Harder They Come to help us get through our day (I was mainly a dishwasher).

The Melodians version is the greatest, but Wyclef Jean did it justice on Friday night, turning it into a forum of inspiration to help his people of Haiti. This was the last song of the event and was my favorite one for the evening. “Oh from wicked, carry us away from captivity, required from us a song. How can we sing King Alpha’s song in a strange land?”

Back in the ’70s I would just merrily sing the song with heart-felt sincerity, while completely clueless as to what it was all about. Apparently, the song is based on an Old Testament hymn Psalm 137, that expresses the longing of the Jewish people to be free from captivity by the Babylonians. It seems as if the Babylonians had conquered Jerusalem in 586 BC. That may be a reference to the Nebuchadnezzar period?

Rastafarians link the plight of the Jews with their own; in this case it would be the dicey social conditions of Jamaica. To make the extension to Haiti is not too big of a leap. The Haitians have been in captivity ever since Christopher Columbus landed there in 1492. “By the rivers of Babylon, where he sat down, and there he wept when he remembered Zion.”

Wyclef Jean brought energy and determination to the house and began to ad lib, as if from some natural fount of leadership and belief. And the musicians were native Haitians, with tooting long-horns, straw hats, portable snare drums…changes gears, speaks in Cajan, strobbing colors of tropical fruit panels, mesmerizes the crowd and says:

“Enough of the mopin’ man, let’s rebuild Haiti, let’s show em how we do It where we come from.” This was an authentic musical potpourri of Haiti, organic street sounds, ‘African polyrhythms’ buildin’ on Rasta-Melodian aspirations to forge a new beginning, to quell the suffering in captivity of Caribbean islanders. Babylonians morph strangely to Westerners in an analogy that we draw from this universal song.

Jimmy Cliff wrote Many Rivers to Cross in 1969 and it was included in the 1972 film The Harder They Come. The soundtrack to this movie was good company for us back in the mid-1970s when I was kitchen help at Austin’s first vegetarian restaurant, The Garden Cafe. Emeline Michel, called the reigning queen of Haitian song, served it well last Friday for the earthquake benefit.

A prominent organ part, such as the one used in Jimmy Cliff’s original edition, accompanied Emeline’s Haitian Creole-inflected delivery. With a marvelous flowing golden gown, and prodigious dreadlocks, she extended her arm and hand out with enticing sympathy and uttered the words:

“Many rivers to cross and it’s only my will that keeps me alive. I’ve been licked, washed up for years, and I merely survive because of my pride.” With the lights dimmed down low, a slower more impassioned performance brought the classic back into the limelight, in terms of being a relevant expression of the tragedy.

The lyrics of the song are about being lost and wandering around in despair. This closely resembles the plight of the Haitian people, who are homeless, thirsty and hungry. I listened to Jimmy Cliff’s original version this morning, but images of those broken people of Haiti ran through my head, just as the Jamaican ones had during an earlier day of my life.

Mary J. Blige did a stirring rendition of the Stephen C. Foster spiritual, Hard Times Come Again No More. Written in 1854, this song struck a nerve with so many who found themselves at odds, positioned on conflicting sides of the American Civil War. While it seems as if Foster is just talking about a need to have sympathy for the poor, he could just as easily be expressing the unsavory condition of slavery.

“Tis the song, the sigh of the weary,

Many days you have lingered around my cabin door;

A leap of faith is required to imagine the plight of 19th century American poverty (Uncle Tom’s Cabin comes to mind), and then to further see the mournful condition of quake-ravaged Haitians by extension. Stephen C. Foster asks us to not avert our eyes to the downtrodden; moreover, he has a message that by confronting sorrow and suffering we are able to transcend its shackles. “Tis a dirge that is murmured around the lowly grave, Oh hard times come again no more.”

Last night (1/22/’10) was my first time to encounter the dainty, yet powerful songstress, Taylor Swift, singing Breathless. Breathless was written by Kevin Griffin of Better Than Ezra. Her backup band was miraculous, and featured a cello player, violin, electric, acoustic and steel pedal guitars; don’t forget the brushes dusting drums.

Taylor Swift, attired in a blanched yellow plebian dress and her natural, diaphanous curly-blonde locks (Goldie-Locks), is forever the down to earth songstress, weaving mellifluous melodies and pleading passionately for the cause at hand.

While the lyrics implore a lover of one’s plight, they could just as easily apply to the troubled Haitian people. “Here you are now fresh from your wars, back from the edge of time. And all that you were stripped to the bone, I thought you’d want to know.”

(Chorus) “When you feel the world is crashing all around your feet, coming running into my arms, Breathless. I’ll never judge you; I can only love you, come now running head long into my arms, Breathless.” Crystal harmonies accentuate the chorus lines. Funny how these words can extend from a romantic condition of the mind to a (suggestive image) of a real natural disaster, such as an earthquake.

Alone and Forsaken is a solemn elegy of a broken love, written by Hank Williams, Sr. Hank’s version is untouchable, but Dave Matthews and Neil Young put hurt and heartache into it that would have made Hank proud.

The lyric turn is as dramatic as the sudden crack in the earth at Port-au-Prince on Tuesday, January 12th. “Our love was in flower as summer grew on, her love like the leaves now has withered and gone.”

This is a love lament done in Hank Williams’ inimitable, lyrical style, but Dave and Neil invested the pathos and necessary bite to properly express a shadow of metaphor, a metaphor for an event that has undone the Haitian people. Utter sincerity and purposeful force permeated their performance. I’m a convert now (to Hank, Dave and Neil).

Neil and Dave could little fumble the ball with Williams’ gut-wrenchin’ poetry that rips through the refrain: “Alone and forsaken by fate and by man, oh Lord, if you hear me please hold to my hand, oh please understand.” In this dirge the woman is a villainess, so I believe that, in turn, she can represent the misfortune of Haiti.

“She promised to honor, to love and obey, each vow was a plaything that she threw away.” Haiti’s long history has included one bad thing after another-Columbus, slavery, sugar plantation labor, Napoleon Bonaparte, Papa Doc and Baby Doc-Western curse, bad juju, never ending streak of bad luck! Neil and Dave eased the burden just a little.

Another truly inspirational moment came when Sting did his 1979 Police song, Driven To Tears. I saw it as a highlight for musicianship as well. The chemistry of the band was magical! Trumpet, trombone, tuba, upright bass and electric lead guitar wailed and bounced off Sting with dexterity and righteousness.

It’s said that Sting wrote the song while on tour with The Police, where he was watching the news and all he saw was media just covering poverty callously and not doing anything to help. There is anger and outrage in Sting’s voice when he says:

“Seems when some innocent die, all we can offer them is a page in some magazine. Too many cameras and not enough food. ‘Cos this is what we’ve seen. Driven To Tears. Protest is futile, nothing’ seems to get through.” If you care, please download the entire Hope For Haiti Now from iTunes and witness for yourself this immaculate performance!

Stranded (Haiti Mon Amour) is a hip-hop collaboration between Bono, The Edge, Jay-Z and Rihanna, that was custom written for the earthquake relief benefit broadcast last Friday night. This is the only original song (that I am aware of) that emerges from Hope for Haiti Now. I got the studio version on iTunes yesterday. The song was produced by Swizz Beatz and Declan Gaffney; so it looks like all of these artists worked together to create this unique song.

“When the sky falls and the Earth quakes, we gon put this back together, we won’t break.” The hook is “Can’t wait until tomorrow, Haiti Mon Amour, Haiti Mon Amour. Not gonna leave you stranded, alone, alone, oh no.” Interesting combination of rapping and lyrical music. Jay-Z warns of the fiasco of Katrina in New Orleans and that for Haiti we better not rely on the government to fix the problem. That’s a given!

Well, I hope you will purchase this wonderful soundtrack from the telethon on iTunes. I’ve already ordered mine and it’s my understanding that it will automatically upload to my iTunes account tomorrow. You will not be disappointed either. This benefit was actually very well done. I want to thank all of the movie and music stars, who put their egos aside for the night, and fulfilled the challenge to raise money to rebuild Haiti.