Recording Artist RaH TwoFive raps success against all odds. In addition, there is a new fashion line at his clothing label, and he has a new album also coming out this month, just in time for Christmas. Titled “Cozy Season,” he says it is the perfect album to play for a guy and girl to cuddle up to together with, with a smooth, jazzy, R&B sound. 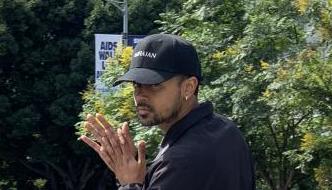 Hollywood Sentinel did an exclusive interview with RaH TwoFive for NewsBlaze, as heard here below with part 2 of that conversation.

As The Hollywood Sentinel states, “Where most new singers have a great voice but lack in solid songwriting, or have great production but lack in vocals, RaH has uniquely got it all, with strong songwriting and production, tight instrumentation, and well crafted mixes ranging from rap to R&B. His further education in fashion design and a model look certainly will not hurt his rise to the top either. Fans of Drake should definitely appreciate him.”

Listen to Part 2 of the exclusive interview with Rah by the Hollywood Sentinel, here below:

As noted in his official biography, “Hailing from Detroit, RaH is ready to dominate not only America, but also the massive Indian Bollywood market, Europe, and the rest of the world as well. Speaking and singing in fluent English, RaH, who is of Indian origin, also speaks fluent Hindi, Punjabi, and even some Spanish.”

And as mentioned earlier on NewsBlaze, Rah states that he is most influenced by daring artists. “People who are not afraid to express their true feelings, even if it’s controversial to the general public,” he says. Michael Jackson, Chris Brown, Jay-Z, Kanye West, Drake, Usher, Diddy, The Weekend, and Billy Joel have influenced the young singer, adding that he is influenced by “artists who perform at a super-high level, and take their artistry beyond the music; into short films, and amazing shows.”

RaH is also heavily into dance and choreography, having joined a hip hop dance group in college, and also learning and performing the Punjabi style of dance from India. RaH says that he plans to include some of his dance work in some of his future videos.

RaH states that he is really into fashion, and started a fashion label, after attending and getting a degree at FIDM (The Fashion Institute of Design & Merchandising) in Los Angeles. He states he loves the colors and clothing styles in Egypt such as gold and turquoise adding that he started reading and studying about Egyptian mythology, and really got into it. He mentions this week that new pieces will be ready to be released soon at his fashion label. Visit his official store at:

As discussed earlier on Fox News, RaH states that as teenager, he began to love singing, and released his first song at just seventeen, getting he says, “A really good response.” He then realized that music was something he wanted to seriously pursue. Now with ten solid tracks out, two outstanding music videos to his credit for “Super Winner,” “Fire,” and “Purple Tears,” and a new album about ready to drop this month, RaH’s passion is quickly paying off, with an impressive and rapidly growing fan base.

If having to label his music, RaH states that his “music is based in hip hop and R&B, but that it has a jazz, lounge, and pop feel to it, and wants to mix genres, not being stuck into any one style or genre.”

As reported earlier on NBC News, maintaining his positive mindset, RaH says he is “intent on creating an immense, positive impact on the world through heart-changing art.” He credits his hope and faith with keeping him grounded, and optimistic. He reveals; “If I didn’t stay positive, there would be no hope. I feel my mission is to help lessen the division that exists in America and the world, and lessen this negativity on Earth, to really help people see and feel real love.”

Check out RaH’s Official Video for “Purple Tears” here below:

Listen to more of Rah’s work and visit The RahTwoFive Official SoundCloud here below: