Music soars this year in 2017 with the ushering in of the Grammys® last week, and later this month, the Oscars®, as detailed here by Bruce Edwin of Hollywood Sentinel dot com.

The biggest night in music was a great success this year, with The Grammy Awards®. Alicia Keys and A Tribe Called Quest were back this year at the Grammys®. After swearing up a storm, Adele walked away with five wins, with four belatedly given to the iconic David Bowie. Katy Perry, Lady Gaga, Rihanna, Beyonce, Bruno Mars, and Metallica also appeared, and all seem to have become standard Grammys® entertainers.

Speaking about the event, Tammi Pickle stated, “It was a truly magical evening. We can’t believe what a beautiful show and after party they presented this year!” Tammi added, “The entertainment at the after party was amazing. It was set up like what seemed a mystical fairyland. I’m sure there were more than 4000 people there!” Sherri Murphy stated, “The entertainment was amazing and the best party of the night was when Tammi danced with Gavin DeGraw when he performed in the crowd. We were also able to see Kool and the Gang and their amazing performance as well.”

The LA matchmaking team made many new Elite Connections for their clients at the two spectacular events. Singles can reach Sherri and Tammi at 800-923-4200 or www.eliteconnections.com 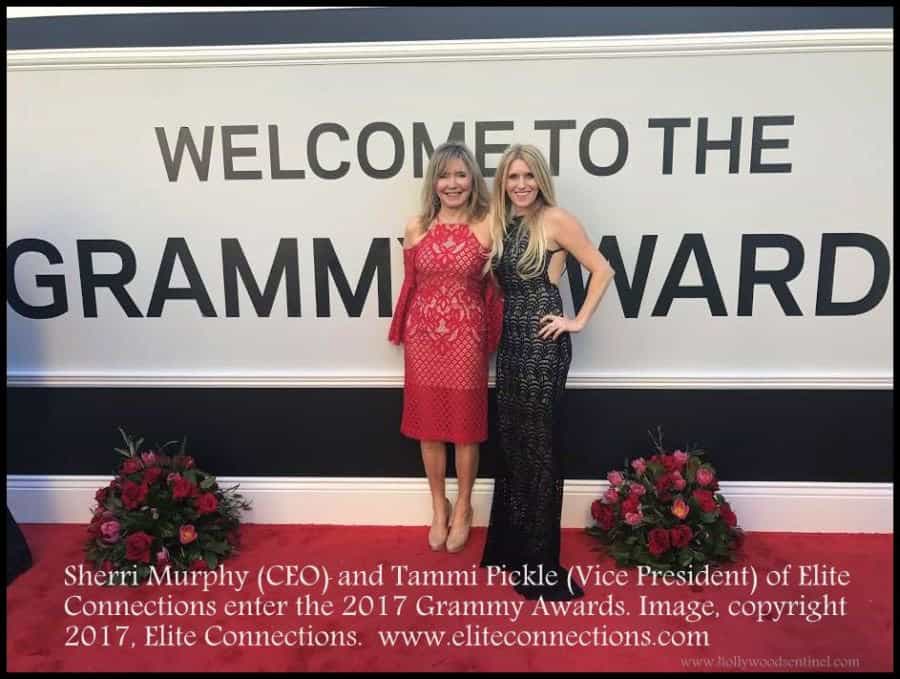 “We’re thrilled to welcome these world-class artists to the Oscars®. These performances will not only celebrate the five extraordinary nominated original songs, but also the integral part music plays in movies,” De Luca and Todd said.

Auli’i Cravalho will join Miranda to perform his Oscar-nominated song, “How Far I’ll Go,” written for “Moana.” An actor, playwright and composer, Miranda is best known for creating and starring in the Broadway musicals “Hamilton” and “In the Heights.” For his work, he has been recognized with a Primetime Emmy Award®, three Tony Awards®, two Grammy® Awards® and the 2016 Pulitzer Prize for Drama (“Hamilton”). This marks Miranda’s debut on the Oscars stage. Sixteen-year-old Cravalho made her film debut voicing the title character in “Moana.”

Seventeen-time Grammy winner Sting will perform “The Empty Chair” from “Jim: The James Foley Story,” the Oscar nominated song he co-wrote with three-time Oscar nominee J. Ralph. In addition to this current nomination, Sting has been nominated in this category on three previous occasions; “You Will Be My Ain True Love” from “Cold Mountain” (2003), “Until” from “Kate & Leopold” (2001) and “My Funny Friend And Me” from “The Emperor’s New Groove” (2000), which he shared with David Hartley. A 2014 Kennedy Center Honoree, Sting has sold more than 100 million records.

Timberlake will perform his Oscar-nominated song “Can’t Stop The Feeling” from the movie “Trolls.” He shares music and lyric credits with Max Martin and Karl Johan Schuster. Timberlake is a multi-platinum recording artist and actor whose numerous awards include nine Grammy Awards and four Primetime Emmy Awards. His acting credits include the Oscar-winning film “The Social Network” (2010) and Oscar-nominated “Inside Llewyn Davis” (2013).

Legend will perform both “Audition (The Fools Who Dream)” and “City of Stars,” from “La La Land,” music by Justin Hurwitz; lyrics by Benj Pasek and Justin Paul. A singer-songwriter, musician and actor, Legend won an Oscar for the original song “Glory” from “Selma” (2014), an honor he shared with artist Common. Legend’s many accolades also include 10 Grammy Awards and 28 nominations.

The 89th Oscars will be held on Sunday, February 26, 2017, at the Dolby Theatre® at Hollywood & Highland Center® in Hollywood, and will be broadcast live on the ABC Television Network at 7 p.m. ET/4 p.m. PT. The Oscars, produced by De Luca and Todd and hosted by Jimmy Kimmel, also will be televised in more than 225 countries and territories worldwide. Additionally, “The Oscars: All Access” live stream from the red carpet and backstage will begin at 7 p.m. ET/4 p.m. PT on Oscar.com.

EMMA CHARLESTON: Falling (single track): A surprisingly stunning, mature, expertly skilled voice and beautiful song from this young artist. In the spirit of Joni Mitchell, Emma Charleston flies here with a dark underside beneath a soaring vocal range and melodic quality across very competent acoustic guitar, lending itself to a song here that is both at once captivating and endearing to this undeniably gifted, rising young star. (On SoundCloud, below), Review by Bruce Edwin, www.HollywoodSentinel.com

According to Emma Charleston, “Falling” originated in the rough and tumble world of a challenging Berklee classroom. She states, “I wrote this song after an exceptionally difficult day of classes. It was a day that pushed me as both an artist and a person. I went through the day feeling like I had to compare myself to other aspiring artists.” With feelings of self-doubt creeping in, Emma Charleston allowed herself to express her feelings in a way that was both musically and emotionally healing.

However, as the songwriting process evolved, “Falling” turned into a hopeful ode to persistence and self-confidence: “In the end, ‘Falling’ became a song about finding yourself in a world of people just like you. It’s an urgent reminder that you have to retain your individuality and find your own way.”

The most recent member of a musical family spanning multiple generations, Emma is influenced by her mother, the award-winning jazz singer, lyricist, and songwriter Rondi Charleston. Charleston’s grandmother, Elsa Charleston, was, in her day, a leading contemporary classical singer based in Chicago.

Emma grew up in a music-filled house, one that fostered creativity. Starting early at violin and piano in the Suzuki method, she made her musical debut at age five. At age eight, she made guest appearances at Lincoln Center, singing background vocals with her mother’s jazz quartet. Charleston has since created, performed, and interpreted different styles of music, resulting in her development as a classically trained singer who can also belt out pop, R&B, jazz, and rock anthems.

Emma has always combined her musicality with her theatrical talents. Her wide array of skills has allowed the multi-talented Charleston to star in, direct, and produce local and regional theatre productions of Bloody Bloody Andrew Jackson, Hair, Sweeney Todd, and Avenue Q. She is currently producing West Side Story at Berklee.