Faith and Devotion. Jealousy and Heartache. Break-ups and Make- ups. Hot Times-Summer in the City! These are the eternal subjects of music. And, these topics were big on Music’s Biggest Night, this week Monday, February 15th, 2016, at the 58th Annual Grammy Awards, featuring all from Adele, Taylor Swift, and Lady GaGa with her tribute to David Bowie, among more, it was indeed, truly a night to remember. But while many stars were singing of a breakup, or dreaming of a hook up, two ladies at Music’s Biggest Night were actually making the love connection happen! 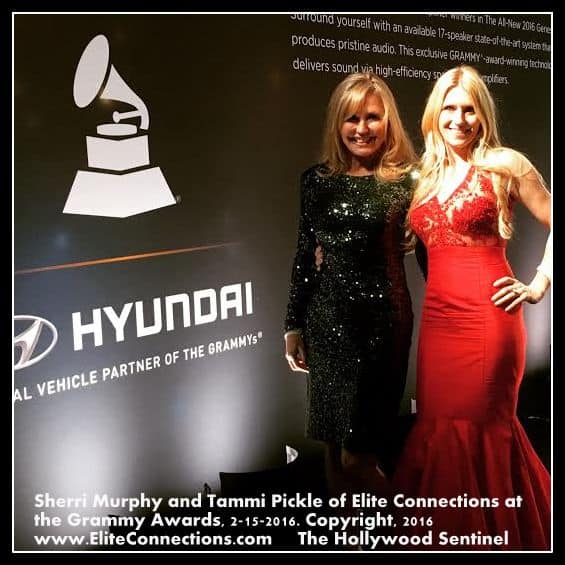 Enter: Celebrity Matchmakers Sherri Murphy and Tammi Pickle from Elite Connections International. While this pretty mother and daughter duo prove dynamite with the stars they meet and match, they also do wonders with the everyday single girls and guys of the world – when that is – they are lucky enough to get seen by them, when the matchmaker team are not walking the red carpet at the latest star-studded event, or mingling with the rich and famous for their celebrity clientele.

Sherri and Tammi Murphy reported that they had a wonderful night out at the 58th Annual Grammy Awards this Monday. Tammi wore a beautiful red lace gown with a tail by designer Eva Chen, alongside her mother in a lovely, sparkling green Badgley Mischka dress.

The matchmakers report, “The Grammy ceremonies were amazing, with one incredible performance after another.” Audience members were included in the excitement of the production itself, by being given a dazzling light show created by wristbands which they all wore, which excitingly lit up.

In between performances, and during commercial breaks, performances from the previous years Grammy Awards were shown to the audience, so there was never a dull moment! 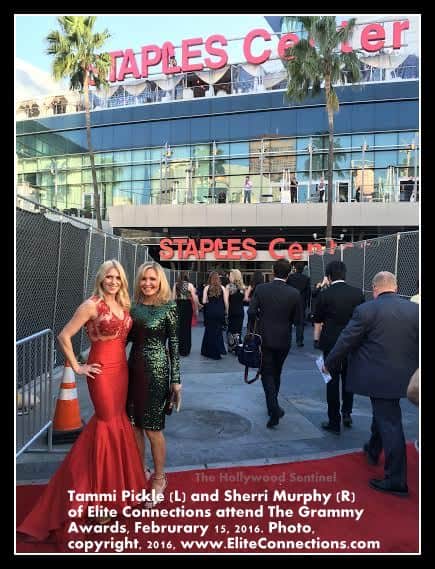 “The 58th Grammy Awards was spectacular,” Sherri and Tammi said, and they both felt incredibly honored to be a part of the magical night. After the Grammy ceremony, the celebrity matchmakers headed next door to the after party where more than 4,000 VIPs and many stars attended.

Matchmakers Sherri and Tammi met people from as far away as London who flew in for Music’s Biggest Night, and the Elite Connections mother and daughter team proved to be in high demand, with VIP singles flocking to their side, ready for a chance at finding true love.

The Grammy Party had a fantastic Rio theme, with stunning dancers and world class entertainers in every corner. Sherri and Tammi danced the night away, while enjoying listening to live performances by Aloe Blacc, Thelma Houston and Jazz artist Arturo O’Farrill, and many others. The celebrity matchmakers said they definitely plan on returning next year with plans of bringing along that special someone for one of their many top clients.

Concerning the controversy over Adele’s performance, Sherri Murphy states, “Adele’s performance was amazing! It’s the second time I’ve seen her live, and she is truly an amazing singer. She sings from her heart, you can feel that. She’s fantastic!”

Meet the Elite Matchmaking team in person and see the “Elite Connections” they have for you. Visit the official website at: