Mandelson seems to have been busy since taking a holiday in a Rothschild owned villa in Corfu recently, where he spent a considerable amount of his time making plans with his business “buddies.”

Part of that “holiday” included talking to Libyan leader Gadaffi’s son, finalising the details of the Lockerbie bombers release.

Having dealt with the Libyan oil deal, he then moved on to the question of stopping internet users from illegally downloading copyrighted music and films. His plan to solve this problem was to cut off the broadband connections of internet users who are seen as guilty of this offence.

This idea has already been rejected quite recently, but the future “King” of British politics obviously cares not that such a plan could breach certain human rights and harm innocent users as well. 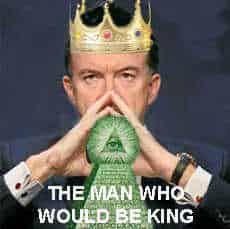 Whilst it is right for the music and film industry to protect their content, it is perhaps their greed that has led to this widespread piracy seen on the internet.

Companies have been trying for many years to overcome piracy, but as we have seen all too often, pirates always find a way to get around any new restrictions.

Clearly, a huge amount of money is lost with piracy and the only answer would appear to be offering the content at a price that tempts consumers into buying?

Bearing in mind that most people would prefer to have an original version and copies of any quality take around 2 months to surface, would it not make sense for an original to be sold/rented at a dramatically reduced price around this time? Surely it is better to make something from the deal, rather than nothing at all?

I once offered this idea to a leading games supplier and was told that they could not sell the product below a certain level because much of the cost was to cover the payment to the inventor.

The logic of this argument is questionable. Would the inventor (or artist in the case of music) prefer to have a large percentage of zero sales, or a smaller percentage of larger sales?

What Mandelson is trying to achieve for his business friends, is a situation where the music and film suppliers can continue to overcharge for their content. Whilst producing a film does require a considerable investment, there is very little risk taken by the producers nowadays. Most producers (to limit the risks) tend to finance sequels, prequels and films based on previously winning formulas, knowing that a profit is almost guaranteed.

Unfortunately, the customer has to accept this “rehashed” content because it is “safe” rather than interesting, but still pay the price you would expect for originality.

The worrying aspect of Mandelson’s plan is what comes next? Will Rothschild’s media supporters be given some special right to supply News content for a fee, at the expense of those who do not? Will the “Elite” eventually take over the last remaining bastion of free speech and put an end to sites like Rense.com who publish articles highlighting the dangers?

In the last few years, certain groups have taken away a large chunk of our rights and freedoms, it is time to say “Enough already!”