We don’t hear much from politicians or the media, about how the trillions in taxpayer money newly shoved into the pockets of the charity scam called Wall Street, to allegedly rescue the economy, are going to rescue the victims of those suspect financial tycoons.

The documentary American Casino, while not sufficiently clarifying that massive stock market con game enough in laymen’s terms to enlighten civilian audiences as to the nuts and bolts of that mortgage lending ripoff that nearly brought the ‘house’ down, does magnificently humanize the grim but generic statistics to expose the horrific crimes against its individual foreclosure victims. Yes, these millions of people robbed of their dignity and very survival, have names and feelings, if not homes.

Directed by Leslie Cockburn, American Casino focuses initially on the major stock market players in this massive deregulated home lending scheme, but assuming a neutral perspective where a more critical interrogation is called for. So it’s difficult to tell if these talking head financial operatives simply can’t express themselves other than in mystifying money jargon, or if their words are more cunningly being used to couch unrevealed crimes. 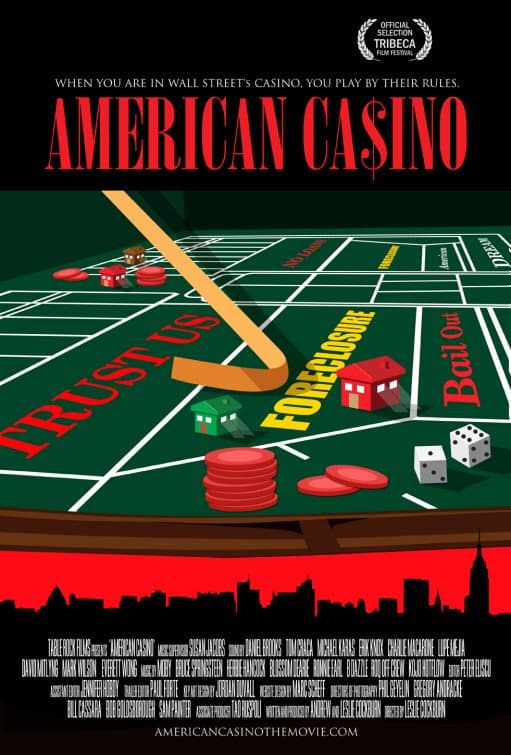 But essentially the gist, if one is willing to pay enough beyond-the-call-of-duty audience attention to what is being said, as if in a classroom rather than a movie theater seems to be that Wall Street bankers took extreme advantage of the deregulated market under Bush. And proceeded to dispense mortgages indiscriminately to home buyers they knew couldn’t afford the payments, especially hoodwinked people of color in the inner city with dreams of owning their own homes. And then selling or rather dumping these risky ‘products’ as pricey bonds to similarly hoodwinked loan companies who would ruthlessly squeeze the home owners into foreclosure, in order to profit off the sale of the abandoned properties.

Only the economy was subsequently left in such tatters, that nobody was buying. If this sounds somewhat like the sort of Ponzi scheme that got Bernard Madoff busted but let everyone else in that milieu off the hook, think sacrificial lamb serving as distraction to an entire tainted system.

But when American Casino provokes its greatest horrific impact, and where the filmmaker seems most focused and activated, is an excursion to the scene of the actual crime, merely one of countless many, in Baltimore. Here, endless blocks of boarded up homes stretch out along the city streets; foreclosure counselors and advocates are helplessly mystified by deliberately incomprehensible lender contracts that seem to be revised and the stakes cruelly raised every time the home owner comes in sight of just catching up with payments; a therapist who cares for the neighborhood stress-impaired foreclosure victims driven into mental illness, is herself threatened with eviction; and a local church minister is forced out of her childhood home and now lives in a car.

This, while over in California, tunnel vision bureaucrats are more concerned with the new residents of these abandoned units – mosquitoes and rodents – than the human beings forced out of them and into homelessness.

Even with a limited understanding of this enormous crisis that American Casino provides, the indictment itself in this movie of those who perpetrated this massive scheme against the US population – now being made an offer it can’t refuse to bail out the criminals to the tune of trillions cannot be avoided confronting via this exceptional expose. Additionally, these scenes of brutal legalized home invasion, Wall Street style, are infused with the raw street eloquence of infuriated foreclose rap rhythms that drive home the message, if not the meaning of it all.

American Casino: The roll of the dice is debt servitude.