Frankie Moreno, the multi-talented singer, songwriter and musician, who sang Tangerine Honey on Dancing With the Stars, has honed his craft since he was a kid. He takes center stage at The Stratosphere Hotel and Casino’s showroom nightly at 7pm, except on Monday, Tuesday and Wednesday. He lives his life for music and music is certainly his life.

Moreno grew up in his hometown of Santa Cruz, California. He learned to play piano at the age of 2, also learning harmonica. At that time his Dad had a band called The Moreno Brothers, where Frankie would eventually perform with. In 1989 he appeared on Star Search and also started Bermuda Records which has since become very successful. 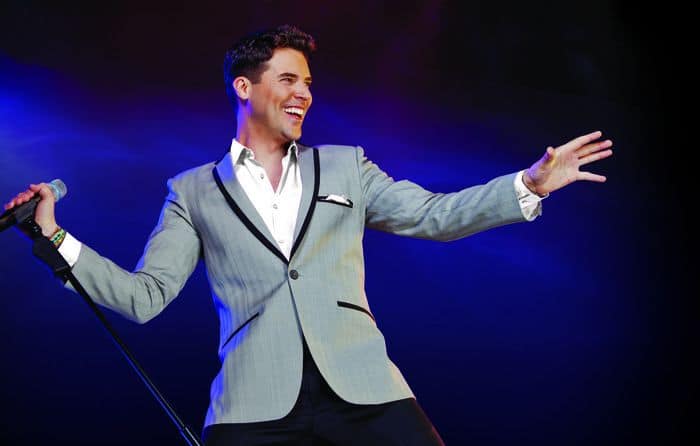 With the passion to perfect his craft, Frankie had great success opening for Mark Chestnut, Little Richard, and The Temptations to name a few. His first album 29 Royal Street was a retro 60’s album which was released in Europe. The second album, entitled “Raw” featured an acoustical album. The newest album entitled Frankie Moreno, showcases Frankie’s writing skills, and arrangements with true wisdom and humbleness. A

Million Road’ sand Moonlight Matinee, two original songs off the album, are beautifully composed and explore Frankie’s travels throughout the world, with his two brothers Tony and Rick. With over 200,000 albums sold and awards such as ‘Best Strip Headliner’ 2012-Las Vegas Weekly, ‘Best All Around Performer2012’ -Las Vegas Review Journal, Frankie Moreno has also received The Key To The City for Henderson from Congresswoman Shelly Berkley’s representative and on September 19TH Mayor Carolyn Goodman proclaimed it Frankie Moreno Day.

Frankie on the other hand has remained humble and continues to write music and lyrics with his Brother Tony and Rick. Taking a look at his band, it sounds like an orchestra. His musicians excel incredibly well, especially the way Moreno incorporates the band as part of his act, which has a driving force that just keeps you toe taping throughout the entire show. In point Frankie Moreno tantalizes his audiences with a touch of comedy, as if they were visiting in his living room. He also casually celebrates with them by actually pouring a shot of whiskey for those who want to participate in the celebration. That in itself wins the audience over. It is however, his ability to relate to his audience, and keep that synergy going that allows Frankie to give an award winning show which brings him new audiences on a consistent basis. 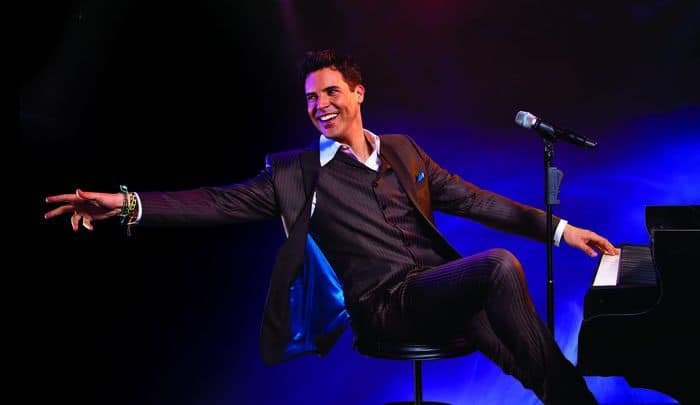 The Moreno band members include Jose Pepe on drums, Tony Moreno on base, Russ Letizia on guitar. The horn section has Chandier Judias on trumpet, Rob Stone on sax and Caleb McKee on trombone. Adding to the melodic structure of the band, Jennifer Lynn and Monique Olivias are featured on violins and Lindsey Springs on cello. There is no question that Frankie Moreno with his high energy and smooth vocals, along with his band makes for one of the most invigorating shows in Las Vegas. No wonder when Frankie and Joshua Bell performed their arrangement of Lennon/McCartney’s “Eleanor Rigby” that it reached number 1 on Billboards Classical and Classic Chart. In fact, Paul McCartney after hearing Frankie’s arrangements and his vocal style stated “Amazing.”

After touring with Air Supply, one of the most recent fun songs Frankie wrote for their new single was “Dance With Me” which hit Billboards Top 40. It is through his writing ability that has kept Moreno in demand with some of the top artist in the entertainment field.

After interviewing Frankie in one of his “mood suites” for http://www.celebrityscene.com/, and our European audiences, also studyinghis style of writing, it would be safe to say Frankie Moreno is one of the “top performers, songwriters of the 21st century” coined by me, Celebrity Scene News. For more information on his concert and television appearances, visit frankiemoreno.com.