Almost every day soldiers are being killed in faraway lands, fighting for an artificially created war, floods and heat waves are taking many lives, politicians are taking away our freedoms and humanity seems to be heading for a major disaster. But for some reason millions of people are able to blank this from their minds in favour of a TV show and a couple of kids called “Jedward.”

Even though the audience is angered each week, when they see a contestant make a surprise exit, get upset with Simon Cowell’s remarks, or question the honesty of the voting and judging, they still keep coming back for more.

The Jedward twins remained in the contest because it was good for the ratings. It also encouraged viewers to vote for the other contestants, in an attempt to get rid of them. Each vote costs the viewer money, so the more you vote, the richer Simon Cowell becomes.

Is the audience voting fixed or manipulated in some way? Perhaps this can be answered by asking the question “Is it really likely that Jedward could have attracted so much support?”

Why does the X-Factor show not reveal how many votes each contestant received, why is this kept from the viewers? Don’t you find it strange that each judge (with the exception of Louis Walsh now) has ended up with an almost equal number of contestants? 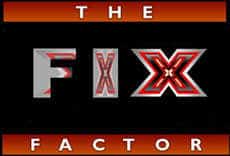 I think it is fair to assume that the winner of the X-Factor show is decided long before the show begins (much the same in politics!), and the weeks that follow are an attempt to make you believe that anyone has a chance, and collect a fortune from the audience with their phone calls.

The only winner of the X-Factor show is Simon Cowell. He makes a fortune from the actual show and can then make even more money by promoting the acts that gained the most public support. By judging the public interest for each contestant, Simon is able to gauge just how much he can afford to invest in them.

We all need a little light relief and distraction occasionally, but some members of the public are obsessed with “trivia” and “titillation,” allowing themselves to be tricked into missing the big picture. It is sad to think that the likes of Jedward or Lady Gaga can stir up more emotions with the public than the more serious events that are taking place on our planet, but the top search terms confirm this to be true.

However, I guess there is nothing I can say that will make you think any differently? With that thought in mind I am going to reveal the winner of the X-Factor show. Yes, that’s right, you can save yourself the agony of waiting another few weeks and the cost of more premium rated telephone calls.