What happens when you cross a technological genius and computer whiz / web programmer with a gothic / industrial lad from San Diego and throw in some Beethoven and Shamanic ritual? You get a rare recording artist named Draven Midnight, or in his words, “A weird bird.” Draven Midnight is an artist / Musician / Technologist / Entrepreneur and all around “Creative Guy” walking, as he says, ” the path of a Mystic.”

Draven Midnight’s spiritual progress led him along the path of the mystery schools. He adopted his shamanic name, Midnight Raven, as an amalgamation from his birth name and from ‘Eric Draven’ the protagonist in his favorite graphic novel, ‘The Crow.’ Hammering out a string of new ambient, gothic, industrial cuts as a solo artist and self trained producer, Draven Midnight does vocals, guitar, bass, and even some of his bands electronic keys and drums. When not pounding out dynamic new audio landscapes in the style of Trent Reznor, Tool, or a Marilyn Manson infused version of the Deftones, he gives rise to a myriad of web properties for a technology incubator / launch pad as creative entrepreneur / technological developer. 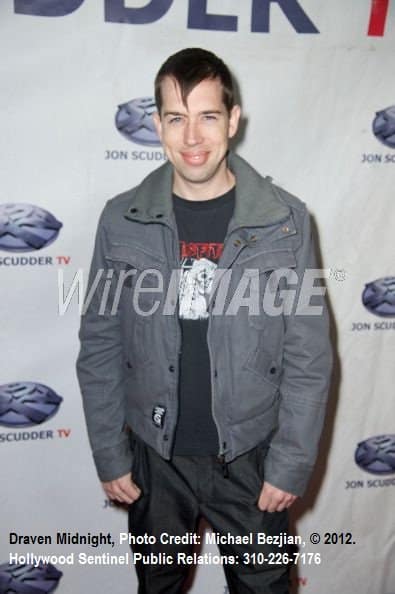 Raised in East San Diego, California, right next to a growing neo – nazi gang population where crystal meth was the poison of choice, he fled a stifling, destructive environment there for the mercurial madness that is Los Angeles. With his nose to the grindstone of audio engineering experimentation’s on Acid / Sound Forge, he merged the technology of desktop producing via his pc with the rawness or rock with a garage punk band. He next joined up with producer Marcos Curel for the musical act Loving Sadness, coinciding with his migration to the land of movie stars and wa wa pedals.

From techno head, to the macabre, to a touch of neo- classicism and the absurd, doused in myth and magic, Draven Midnight is not merely an artist creating music, he is a musical being giving others an artistic experience. While most rock and rollers either fade out or burn away into an oblivion of death or decay, Draven Midnight traverses that pitfall, for something far more lasting.

When asked how he wants to impact society, his answer sums it up best, “In a positive way. Da Vinci is an inspiration. There is so much depth in his work. He is notable for art & science equally. I want to lead others to their spirit within” he adds. Indeed, Draven Midnight is here to give listeners far more than the ordinary. Yet for him, walking the path of the mystic is not a choice, it is who he is. Still, he is not afraid to tear it up when need be. “Don’t let life get you down,” he advises, “When the going gets rough…rip a hole in it!”

To see Draven Midnight Live, experience Pre-Chella; a month long alternative to sold out festival options featuring The Live Premiere of The Undead Hearts, and Digital Maxi Release ‘Beside a Ditch.’

Just Prior to Coachella kick off, Recording Artist Draven Midnight will be unveiling his long anticipated premiere of new studio project, The Undead Hearts. At the stroke of midnight tonight, an intimate audience will have the opportunity to witness this one time only, exclusive event. Also, a live web feed will be open beaming across the Internet globally for those wishing to voyeur the event.

For those unable to attend the popular Music and Arts festival in Indio, CA this Spring, you’re invited to see Draven Midnight and friends at The Good Hurt on Venice Blvd in West Los Angeles, tonight Friday the 12th, 2012, 10pm-2am Pacific Time, Thursday April 12 for PRE-CHELLA. VIP passes are available for both LIVE and ONLINE. VIP Pass holders receive FREE digital copy of ‘Beside A Ditch’, and the first drink is on the house.

To hear the music of Draven Midnight, visit:

For more information, contact publicity department at tel / fax 310-226-7176 or e-mail on front page of www.TheHollywoodSentinel.com