Her first TV appearance was on “Strictly Come Dancing,” but you can be absolutely certain you will be seeing a lot more of Dionne Bromfield in the future.

She has a simply amazing voice, and if you were to hear her for the first time on the radio, you would never guess she was only thirteen.

Dionne is so relaxed and confident when she is performing, you would think she has been doing this for ages.

Her style is unusual, but contains more than a hint of Amy Winehouse. But this is probably not surprising, as Amy is her Godmother.

At the moment Dionne has recorded mainly cover versions (quite a few old Motown hits), but her age will perhaps prevent her from singing anything too mature for a little longer (even though it is well within her capabilities).

She has absolutely everything a future star could possibly need to succeed. She is pretty, sings with a lot of feeling and can dance as well. Her lack of fear in front of an audience may also pay dividends should she ever consider acting at a later date. 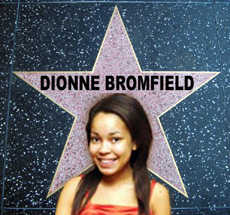 Amy Winehouse has given Dionne a great deal of support, even singing duets with her.

Dionne will be the first artist to release an album on Amy’s new record company (Lioness), which is guaranteed to be a big hit for both of them.

At the moment Amy Winehouse is in rehab, in the Caribbean, and we shall have to hope that this is one area that Dionne does not follow her Godmother. But Dionne seems very mature for her age and is well aware of the problems facing Amy.

If you haven’t heard Dionne Bromfield sing, you will find some links below to check out this singing sensation:

Dancing in the Street

Two can have a party

When you compare Dionne’s voice with the “artists” that appear on some of the talent shows currently running on TV, I’m sure you will agree that this girl is in a completely different league (or planet), making her rivals look like mediocre karaoke singers!

I am certain that if Dionne continues the way she is, there is no doubt she will become a massive star and rank at the top with the very best. In the meantime, I am going to listen to her songs again!