Christian Death performed along with numerous other bands on this cool October night in L.A., which included Fangs on Fur, Catholic Spit, Death on The Radio, The Goons, Untoward Children, and Nightmare Enterprises, with Christian Death headlining. Doors were supposed to open at 7, yet they opened closer to 8, with the club evidently running around an hour and half late. None of the opening bands fit the genre of the headliner, except remotely, Fangs on Fur. 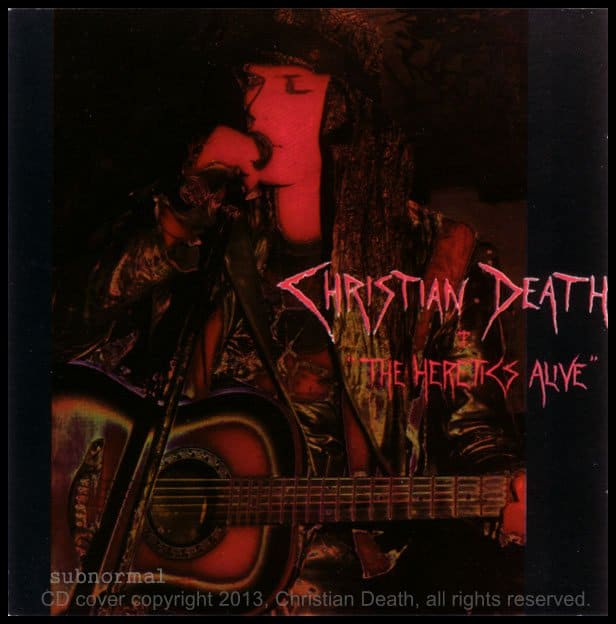 While all bands worked hard, The Goons were the tightest of the punk line up aside from Fangs on Fur and of course, Christian Death. After hearing band after band to compare, it was easy to see who had the most technical skill and experience as great entertainers on stage. Christian Death excelled, lived up to their high expectations, and did not disappoint.

What did let most down however, was the line up itself. Even the young singer of the Goons himself complained about how stupid it was to have booked them and a bunch of other punk bands to open up for a gothic band. Exactly. Promoters should know their musical genres, and keep their bookings in the same realm. Further, when one has a band as prolific and legendary as Christian Death, you don’t need a half a dozen bands opening for them. If you do, start at noon, not at around 9pm!

One of the female fronted opening bands was over-heard by myself angrily complaining about how she didn’t want to open for a bunch of Satanists and their stupid fans. This was really ignorant, since A), Christian Death are not Satanic, and B), their fans didn’t want to see this woman’s stupid band either.

Many fans present actually complained to me about this, yawning, and saying, “Oh God, another one? We came here to see Christian Death!” A number of girls I chatted with and I all joked, placing money-less bets on whether their would be yet another opening band or not. It was really quite ridiculous, and a decision by the promoter and club- which the bands have nothing to do with- that was beyond stupid.

There are plenty of good bands in L.A. that would have been more appropriate openers, if one knew the genre and what they were doing when booking. And again, one opener is all that is needed, or with a band such as Christian Death – none, simply have a DJ for an hour or so before the show – again, playing music of the same genre, not a totally different style!

Some business had a merchandise stand set up in the venue selling what I suspected may have been bootlegged music of punk bands that were not even playing. Even if it wasn’t bootlegged, why? Is this a club or a record store? I have been to over a thousand shows of all genres, and not once have a seen something like this. Why work on selling wares by artists that are not even present, when the bands present are there in person, and working hard to make a living? That whole table space should have been occupied by the headliner, who should have first priority and presence at a venue. Even worse, this whole table area had dreadfully bright white lights beaming on a large section of the club so people could see the wares, which greatly killed the mood of a whole section area of the venue with a cheap white spotlight.

The venue itself is actually very nice, with a staff that was kind and professional-at least to me. With a great sound system, a nice, elevated sound booth for the lighting and sound tech, and cool lights in the bathroom that change colors, a nice sink and mirror area shared by girls and guys, and a cool outdoor patio area, this club has a lot going for it. The girls bathroom is marked with some fetishy looking hot chick wallpaper, so of course, I assumed it was the guys. Guys like hot chicks, right? Wrong. It was the ladies. I know because I came out of it once and a girl told me it was the ladies, and I after I asked her where the men’s room was, which I didn’t see, she told me it was OK, it was fine with her if I came back in to the girls. Skipping that proposition, I can at least say, the girls are friendly at a Christian death concert.

Back to the club, they also have reasonable prices at the bar for drink and food. What needs improved here further is some new tables and chairs, better quality wine, and a proper stage that is actually elevated properly and secured from the audience. Also, that nice patio area outside should be better maximized with another bar, speakers, sofas and chairs, and a T.V. that shows music videos or films. And, get rid of those annoying and unnecessary heavy strips of plastic going down across the doorway to the patio and bathroom entrance that smacks people in the face as they pass through. Lastly, the bar and lounge area in the front should be turned into the backstage area for the headlining band, with no other access unless authorized by the band. Yes, bands are actually supposed to have a dressing room and secure, lockable backstage area- duh.

After countless hours of waiting for Christian Death to take the stage, some older dude starting talking to me. He said something which I could not make out due the venue being super loud, and the other fact that I stood right in front of the speaker one time at a Nine Inch Nails gig. By the time A Perfect Circle left the stage who opened back then, I was toast. I nodded like I could hear the dude and told him the last band I saw was Death In June which I thought was what he asked me, and the next thing I knew, he was introducing me to his cute daughter who looked like a vampire who spent the next hour or so yelling stories in my ear over the bands about witches and haunted things, and about how she was studying forensic science so she could work in the morgue. Aww, how cute.

Christian Death finally took the stage at nearly around 1 AM (starting so late again due to the club and promoter), and were very kind and great to their audience, delivering an expert show with phenomenal talent. The always handsomely beautiful Valor looks as though he has not aged a day, sounded perfect, and did great guitar, working the crowd into repeated frenzies with newer and older classics. Maitri, who is equally incredibly hot, wearing sexy black fishnets and stiletto boots, played great bass and sounded divine. Jason on drums adds a cool look to the legendary band, with spiked hair and black eyeliner, and did a great job on percussion.

The Christian Death fans were cool, showing a lot of enthusiasm, and dancing more than the L.A. crowd did at Mission U.K. which I saw earlier this year. A mini mosh pit started by some punk rockers for some of the songs, but nothing that got out of hand.

One stupid girl however, made a crappy shot video of one of this concerts songs on her phone and posted on You Tube, then complained how the show was ruined for her because Valor and Maitri were arguing all night on stage. Are you insane lady? First of all, I saw every single second of the same show, and not one time did Valor or Maitri argue. Why this idiot would waste her time making a video of a band and uploading it on You Tube, and then complain about the very band- with lies of all things, makes no sense to me. Then again, some losers have no life and lie, don’t they? There are plenty of jerks and idiots out there, and the goth scene -which I love dearly, certainly at times has no shortage of them.

Thinking of my own desire to hear more music, and thinking of the cute African American twin girls I spoke with who drove clear from Texas to L.A. to see this Christian Death gig, I was bummed out, as after around an hour or less, the band’s set was apparently, rudely and foolishly cut short by the house. Right after the show, the band was rudely rushed to hurry and get off of the premises, even though they still had to pack up gear and load out, and had a long line of fans lined up trying to buy merchandise, since the merch space was earlier dominated by the pseudo record store. While being rushed to leave the premises, the band had still not even gotten fully paid. Bad move. Meanwhile, some thuggy guys started lining up outside- one getting yelled out by an even bigger bouncer, and a dozen or more young looking Asian girls (some looking underage and out past curfew) were seated- all waiting for another event that was starting up at 2am.

Inside, one bouncer reportedly yanked the drink out of a gentleman named Nico’s hands. Nico being of course, the musician and filmmaker who is friends with and has worked with Christian Death for many years. Instead of apologizing to the artist who was on the guest list of the band, the bouncer began bullying him, getting in his face and telling him, “You have to leave!” This was not more than five minutes after the gig ended. A very bad move and bad way to treat any fan – let alone a VIP filmmaker.

Despite the problems, which can and often do happen to any recording artists, especially at clubs as this one, the good news is that Christian Death played, delivered greatly, and we got to see them. And, no amount of idiocy in the world from Lost Globos could change that. It was not only the highlight of my night and my October to see this show, but of my year. Thank you Christian Death for the memories. We adore you.

Visit the official social media site for Christian Death at:

The offices of subnormal do not endorse any advertisers that appear on this page or in connection with this story, on the contrary, we laugh at you.

subnormal magazine was the hard copy rock magazine from the 90’s that returns here online on News Blaze, and at The Hollywood Sentinel. The magazine returns later this year with its’ own site. The image and video herein are copyright 2013, Christian Death. The story itself is anti-copyright 2013, and may be reprinted if you do so in full and provide credit to subnormal and back to this site. If you do not, the NSA will peek into your bedroom, record your activity with google glasses, and waterboard you while you are forced to twerk for 100 hours. Contact subnormal at TheHollywoodSentinel.com.