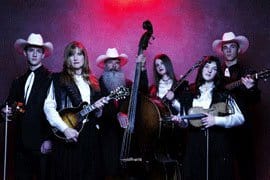 Cherryholmes – seems like a strange name for a band, but it just happens to be their real name – all six of them – Mom, Pop and four kids.

If you are into bluegrass and you don’t know them, get right on this band now and if you don’t usually listen to bluegrass, break out of your shell and check them out. This one’s a keeper. Add them to your collection – we did.

Last month, we saw Doc Watson at the Mondavi – Doc Watson Bluegrass “Hills of Home” Concert For The Hillbilly. Doc, David Holt and Doc’s grandson, Richard Watson were great, exactly what we expected.

To us, Cherryholmes was an unknown quantity. Only two things we knew for sure. They play bluegrass. They must be good or the Mondavi wouldn’t have them.

What we got was a massive flow of energy, clear, strong vocals, smooth harmonies, plenty of movement, interaction, showmanship and foot tapping, high-energy Bluegrass.

They started out with no introduction, jumping straight into the very fast “How Long,” followed by “I’ll Never Shed Another Tear,” “You Don’t Know What Love Is” and the extremely fast and furious “The Nine Yards.” This band is so good, why hadn’t we heard them before?

Finally, Jere (Pop) put down his upright bass and came to the mic to talk to us, saying “We’re not used to playing in a place as fancy as this… think hay bales and animals.” That must have worked because we heard a few moos and grunts.

Then Jere introduced the band, 17 year old Skip on guitar, 19 year-old Mr X (BJ) on fiddle, 23 year-old Cia on banjo, 15 year old Molly on fiddle and Sandy (Mom) on mandolin, reminding us that “she looks darn good for the mother of six.”

Next up was a change of pace, with the slow and beautiful “Mansions of Kings,” with Sandy in the lead. “Tell Me Why” was written by Molly, apparently a 12 month effort before she taught it to the rest of the band – definitely worth the wait.

Jere likes to tell stories. We particularly liked the one about the end of a family argument, where Sandy told him he was a “model” husband. Later, while sitting down, rather pleased with himself, he was smacked in the back of the head by a dictionary – Webster’s Collegiate Unabridged, which defines model as “a small replica of the real thing.”

Although the band has only been touring for five years, they have appeared at “The Grand Old Opry” many times and Jere says “we’ve been accepted as part of the family.” Jere noted the passing of Porter Wagoner and they played “Darkness On The Delta” as reminiscent of Porter Wagoner’s era.

After the final song in set #1, Jere advised us all to go outside and have some refreshments, noting that having a belt can make the second half much more interesting – and besides, it could mask any mistakes. He also said that while outside, he would check to see if anyone left at half time.

We decided not to leave and not to get a belt, so we just sat and talked to a friend about the band – and knitting yarn. 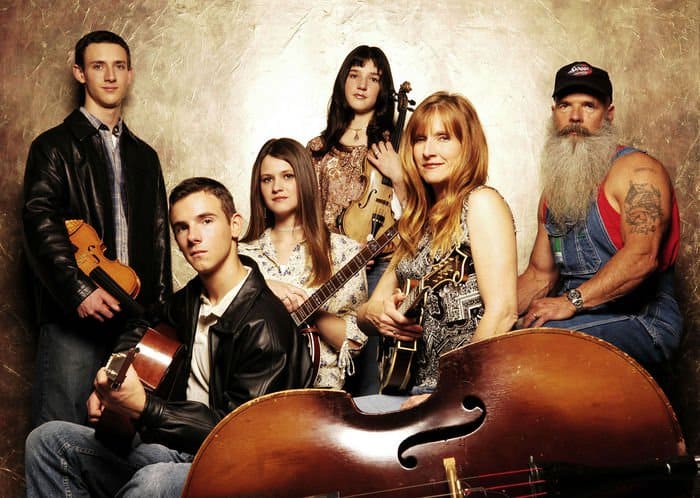 The second half started fast and furious, with “Don’t Give Your Heart To A Knoxville Girl,” written by the talented Cia, then “Heat Of The Morning,” “Brand New Heartache” and “Tallahassee,” which really got the audience involved.

Jere wanted us to know that he was pleased to see us back after the break “Its always good to have an audience.” The band’s living quarters while on tour is a 45 foot bus. It is apparently the source of inspiration for at least two songs – both of which happen to be about murder. That was the opening cue for “Red Satin Dress” with Jere singing.

Next up was “Bootstrap Bill,” an instrumental by Molly, Mr X and Skip, followed by Cia with “Black and White,” the prison song, then “Dave’s Old Hat” and the extremely fast “O.B.S.”

A standing ovation brough them back for “He Goes To Church” and “Train 45.”

The Cherryholmes now exist with the help of a lot of supporters and sponsors – and Jere let us know, by naming them all – a really nice thing to do. According to Jere, “It’s the epitome of bluegrass success to get your picture on a can of beans.”

The final part of the performance was outside, in the foyer, where the whole family signed CD covers and programs – a really nice way to end the evening. Real family, real bluegrass.

So if you can get to Chico, California on 4th or 5th November, Carmel on the 8th or San Bernardino on the 9th, just do it, and get to the Cherryholmes concert, because they are definitely worth it! Hey, not fair – how come Chico gets them twice!

After the show, Skip was very kind and found a copy of the playlist for me and Cia told me where to get the photo. Its much appreciated, thank you.

You Don’t Know What Love Is

Darkness On The Delta

He Taught Me To Yodel

Don’t Give Your Heart To A Knoxville Girl

Heat Of The Morning

He Goes To Church

Thanks again to the Mondavi Center, for another wonderful show.