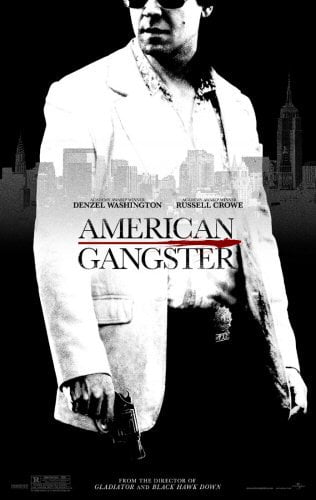 At the height of his reign as New York’s heroin kingpin during the Vietnam War, Frank Lucas was raking in over a million dollars a day on the streets of the City. This was no mean feat for a former sharecropper who had arrived from rural North Carolina penniless and with no formal education.

But on the way to building his own drug empire, he had, for twenty years, learned the ropes from Harlem’s most notorious mobster, the legendary Bumpy Johnson. And it wasn’t long after his mentor passed away in his arms, that the protege summoned his five younger brothers North to build an illicit family-run operation.

Known as the Country Boys, Frank restricted membership in his ruthless gang to relatives and friends from his hometown, hiring only folks he felt he could trust and thus control. However, what really made his heroin ring so successful was the fact that he figured out a way to cut out the middleman entirely by buying his dope directly from poppy growers in Southeast Asia.

With the help of soldiers stationed both overseas and on domestic military bases, he smuggled uncut drugs into the country in the caskets of deceased Vietnam vets. As a consequence, Frank’s “Blue Magic” brand of smack was twice as pure as any rival’s and sold for half the price.

Before he and his confederates were finally caught and carted off to prison, Lucas would amass a personal fortune in the hundreds of millions. While some might admire a man from such humble roots for having developed the savvy to create an operation with a corporate-like structure, make no mistake, this was a cold-blooded killer who never gave a second thought about exploiting the human condition or assassinating any cop or competitor who stood in his way.

Regardless, since nothing is more meta-typically American than a graphic gangster saga, it comes as no surprise that the story of Frank Lucas’ rise and fall would find its way to celluloid. Directed by Ridley Scott, the movie stars Denzel Washington in the titular role and matching wits with Russell Crowe as Richie Roberts, the honest cop-turned-prosecutor who ultimately brought Frank to justice.

An elaborate epoch of Shakespearean proportions, American Gangster unfolds like a blackface version of The Godfather, exploring an array of universal themes along the way, ranging from loyalty and betrayal, to love and hate, to ambition and corruption, to sin and redemption. Regrettably, despite these classical pretensions, its $100 million budget and a stellar cast (including Cuba Gooding, Jr., Chiwetel Ejiofor, Ruby Dee, Josh Brolin, Carla Gugino, Roger Guenveur Smith, Joe Morton, and rappers T.I., Common and RZA), the picture still somehow adds up to less than the sum of its parts and is thus likely to leave a vaguely sour taste in the mouth of the more discerning cinemagoer.

For more than anything, the film feels like an overextended gangsta rap video, given its periodic graphic displays of gratuitous violence and its repeated resort to topless women as props carefully-positioned for purposes of titillation. In general, its female characters are simplistically-drawn, one-dimensional archetypes, whether mothers, Madonnas, whores or lawyers.

They’re given short shrift in favor of a macho motif which constantly contrasts Frank and Richie’s flawed souls to highlight a telling irony. Yes, Frank may be a creep who ruined countless lives, but at least he’s a devoted family man and a good provider. On the other hand, Richie may be an unbribable police officer, but just look at his relatively-pathetic existence marked by a messy divorce, shallow relationships and ostracism from colleagues. Who would want to be him?

Why Ridley Scott would have Frank Lucas’ bio-pic revolve around a contrived juxtaposition equating good with evil is beyond me, especially when the New York Magazine article (http://nymag.com/nymetro/news/people/features/3649/) upon which American Gangster is based makes no mention of Richie Roberts. An irresistibly seductive celebration of a monster which will undoubtedly deliver the wrong message to many an impressionable young mind.