NewsBlaze News
Home Entertainment Music ‘All We Are Saying’-Forces Behind The Breakup Of The Beatles!

So John clearly expresses in a song the nature of the breakup of The Beatles. I have never read a simple a priori explanation for this tragic breakup. I mean, really, what were the forces behind the breakup that came into play by September of 1969?

These forces, triggers, or causes for the simple fact of this demise are psychological, spiritual, and/or historical in nature. Occam’s Razor (a reduced-to-its-lowest-terms, cause and effect) will come in handy here; simple, but strong forces were present here, like a sharp pendulum on the neck-collar of a victim of the Inquisition, the Fab Four were no more *(9 of ’69)!

Or “Off With Their Heads,” says the Red Queen in Alice In Wonderland! 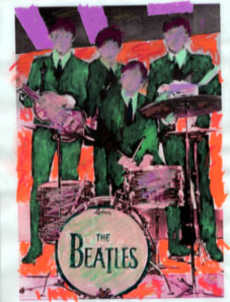 The halo on The Beatles’ ascension to power gleams in their strong ambition. John and Paul had both lost their mothers and they found strength in each other by way of songwriting. They had emerged from working class stock in Liverpool, and lucked upon a very good gig in Hamburg and then another excellent gig later on at the Cavern Club, where they were the houseband; this fomented the phenomenon of ‘Beatlemania.’

Unity of purpose was behind them, the fire of ambition to make it in the music business drove them forward, and this ambition dictated sidelining anything else in order to produce number one records. John use to say, “To the Toppermost of the Poppermost!” This was excessive madness, ambition along the lines of Macbeth.

By the same token, their latter days were characterized by ambivalence, infighting, and even boredom. They had already achieved their goals, had already scaled the scaffolds the highest ‘platforms of success,’ and now were twiddling their thumbs in boredom. By January of 1969, when they began the “Get Back’ sessions, they were in a La La Land of indifference.

They were supposed to be returning to their roots of primal rock ‘n’ roll, but they were devoid of energy and drifting on polluted green seas of self-pity and puddles of narcissism. *(see “Why The Beatles Broke Up” by Mikal Gilmore in the current issue of Rolling Stone for many good factual details on the breakup).

When confronting this troubling breakup or ‘divorce’ as John called it, I believe you must consider the fragile issue of egos, this is psychological territory, and can get a little dicey, as you dissect these complicated personalities. Let’s just suggest that early on their egos were diffused, or suffused with each other *(the mystical angle) as they struggled to make it in the business.

Just look at the early song writing and recordings. You can barely distinguish between them. Consider “She Loves You” or “Please Please Me” for times when their egos were sacrificed for the greater cause-success beyond anything ever experienced before in showbiz history! 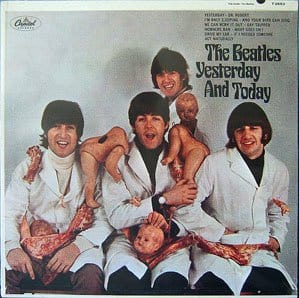 John was alone with Yoko at Bed-Ins, Bagism, opposing The War, and spreading peace; Ringo was off making “The Magic Christian;” George was embracing ‘Dylanism’ and eastern spirituality; and Paul had married Linda Eastman and was making music in the country at his farm in Scotland. They weren’t a band anymore, because they were only interested in feeding their own egos.

The spiritual force behind this untimely demise of the ‘World’s Greatest Band’ affected and infected their art, the soul of their commonality, their songwriting. John was writing with Yoko now, not with Paul. Paul was writing with Linda and George was doing some superb writing on his own, or with Bob Dylan, as in “If Not For You.”

“The Ballad of John and Yoko” is the last song that John and Paul ever played together on. Without the unity of songwriting, the magic of Lennon/McCartney compositions, it was essentially all over. This was the spiritual glue that held The Beatles together, and was thus the pry bar that loosened its grip; therefore, without this songwriting partnership, they went their merry ways.

I will go out on a limb here and put forth the idea that 1969 was a very destructive year and was a ‘wrench in the works’ for The Beatles. This is where a strong historical force comes into play-the 1960s was the decade that defined The Beatles! So therefore it is fitting and comprehensible that they would not survive outside of the 1960s.

Having witnessed the vibes of 1969, I can personally attest to negative ions being in the air, a sort of ‘End of the World,’ Apocalyptic, Cataclysmic vibe that permeated the atmosphere. I suspect that The Beatles felt an inevitability that they would go down the tubes in that year.

This is mostly intuitive, but there are milestones that you might look to. Richard Nixon took over the reigns of the presidency in that year. John and Yoko became obsessed with opposing the War in Vietnam; in fact, John returned his MBE medal to the British government.

Okay, a checklist of destructive events is in order: the My Lai Massacre was exposed, the Manson killings that revealed negatives in Beatles’ lyrics, the Altamont Speedway fiasco, Chappaquiddick, Woodstock and Easy Rider (a new culture outside of The Beatles’ sphere), the free reign of the Zodiac Killer, and the killing of two Black Panthers are a few cited examples of negative impact. Destruction was in the air in 1969.

The forces behind the breakup of The Beatles were simple, but powerful. The volatile politics of 1969 alone was strong enough to trigger a split-up. And where once egos had been sacrificed for a greater cause, they now raised their ugly heads and exacted a fracturing of purpose and commitment that was devastating to the Band. 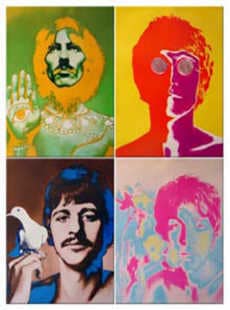 Moreover, motivation by way of ambition is a factor, or actually, its converse, apathy or ambivalence peers forth its homely countenance and depletes The Fab Four of energy and creativity.

All goals had already been met; the Fab Four were empty Alexanders that had conquered a stupefied world, with ‘nowhere to go.’ These Napoleons or Attila the Huns *(or perhaps Julius Caesars) had scrapped the youth to cinders (not consciously) and made mincemeat of society. It was all over!

Artistically, they were simply four individuals with four unique visions of art, and now none of them fit together anymore. The dream was over, The Beatles were gone, the scrambled eggs were harmonious-less ham omelets now on four separate ‘Denny’s Platters!’ “Mama don’t go, Daddy come home.”