The first scene in this film is extremely amusing but then things go downhill fast, gathering momentum at such a rate that all hope is soon lost and what promised to be an entertaining romp turns out to be one of the most idiotic comedies released in a very long time.

Griffin (Kevin James) proposes to his girlfriend Stephanie (Leslie Bibb) but she turns him down because he’s a lowly zookeeper. The two break up, and Griffin doesn’t see Stephanie again until she turns up at his zoo five years later. It’s clear Griffin is still smitten with his ex so the zoo animals, who all worship their kind-hearted keeper, decide to break their code of silence and help him win back the love he has lost. 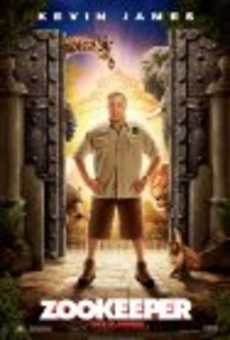 Obviously the conceit of this film is that the animals can talk, but there are no clues that first build intrigue and make the audience realize that this is no ordinary zoo. Instead, a lion simply starts talking to Griffin, Griffin obligingly jumps into an ‘OMG-I-am-completely-shocked’ routine and, after this cringe-worthy moment, the other animals simply start yapping, with no hint of the magic necessary to take us into true fantasy land. From this moment on, Griffin does everything the animals tell him without question and their relationship is never explored, which is not only inadequate writing but also a huge lost opportunity for both conflict and comedy. As if this isn’t disastrous enough, the voices of the animals are quite amateurishly synched and don’t represent the characters they are supposed to be, in particular the tiny monkey has a deeper voice than the grizzly bear, who sounds kind of gay.

There are many, many plot holes in this film, an example of which is when Stephanie turns up after a five year absence, all starry eyed and gushing at Griffin. She originally turned down Griffin’s marriage proposal because he’s a zookeeper and, as he’s still a zookeeper, this doesn’t make sense. Instead of spending time explaining the relationship of these erstwhile lovers, we are fed a load of physical absurdities that are as entertaining as watching someone slip on the same banana skin over and over again.

The list of writers for this film is so long it’s a joke. Producers had a go, actors had a go and, with so many bodies knocking around, it’s even more astonishing so many clangers were dropped, particularly the one where Griffin suddenly appears in a business suit, selling cars, with the leaving scene at the zoo completely missed out and not so much as a goodbye to the animals he’s supposed to adore. This is a PG 13 and obviously the kids will want to know why the zookeeper is suddenly being so mean, which the parents can explain by either dismissing it as one of those ‘bad break-up’ things or tell them the truth, which is that shelling out $100 for tickets and popcorn doesn’t necessarily guarantee the film won’t turn out to be one almighty dud.