This is “art house” movie-making but with meaningless dialogue in place of introspection, surreal sequences instead of theme, and pretentious vinaigrettes that replace the ‘slice of life’ synonymous to that genre. So it’s art house, without the art, and not much pleasure to watch.

Fred Ballinger (Michael Caine) is a world-renowned orchestra conductor. He’s widowed, recently retired and on vacation at an exclusive Swiss resort with his film director best friend, Mick Boyle (Harvey Keitel), his daughter, Lena Ballinger (Rachel Weisz) and her husband, who is also Mick’s son. While there, Fred receives an invitation from Queen Elizabeth II to perform at Prince Philip’s birthday, which he insists he doesn’t want to do. In the meantime, Mick is trying to get his final movie produced, but his efforts are thwarted when Brenda Morel (Jane Fonda) withdraws from the project. 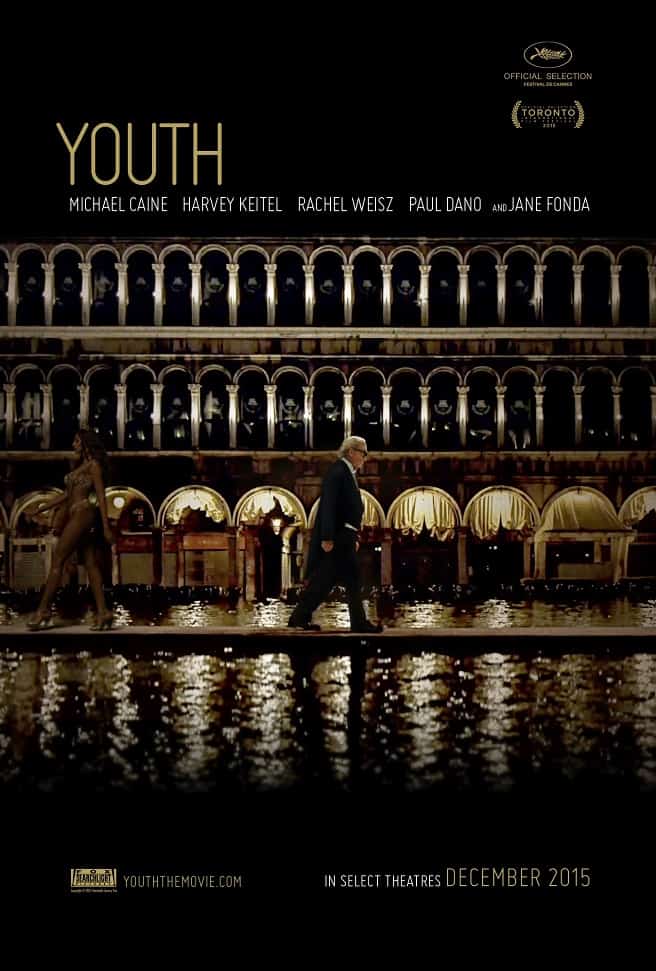 There are some things which should remain covered, and that includes the semi-nude bodies of 82-year-old actors. Unfortunately, however, the filmmaker doesn’t eschew this view, and we are confronted with aging flesh on more than one occasion. As unappealing as this is, at least Fred had a reason to strip, as he’s in a spa, but the many other tableau-esque visuals that bombard the screen have no such purpose. They’re irrelevant to anything, including each other, and could happily be placed just about anywhere in the patchwork of scenes that make up this film. The fact that they’re stunning is of no consequence, as such beauty belongs in an art gallery, not a film set.

Against this backdrop of irrelevant imagery, the characters interact with equally un-filmic exchanges. Monologues abound, with back stories being delivered like dropping bombs, which sometimes feel preachy and others like being hit over the head with a sack of cliches. Rachel Weitz has a particularly long speech, in which she describes her father as a most abhorrent man and not just as a father, but also as a husband. This raises the question of why she’s working as his assistant and, furthermore, why she wants to be on vacation with him. Any normal person would want to escape from such a tyrant for at least a couple of weeks.

Of the many unrelated topics thrown into the pot, the strangest of all is an exchange between Brenda and Mick. Mick attacks Brenda for taking a TV role instead of being in his film, proclaiming the inferiority of TV over the wonders of the silver screen. This is obviously a point the writer/director wanted to make but, before venturing into such transparent waters, maybe he should consider that it’s possibly movies like this that send audiences scuttling back home to open an account with Netflix.