The belief is that everyone has a book in them, which is true, but unfortunately it’s not bound to be a good one. Another belief is that the more you write, the better you get, but this is Woody Allen’s 40th offering and although he started with some gems, much trash has followed, many of which simply went through the motions of storytelling and showed Allen’s distain for the audience and the people who finance his films. Tall Dark Stranger hovers somewhere in between OK and bad, so the audience isn’t exactly insulted but neither is any great effort made, so you might as well wait until it comes on TV. I don’t think it will be long. 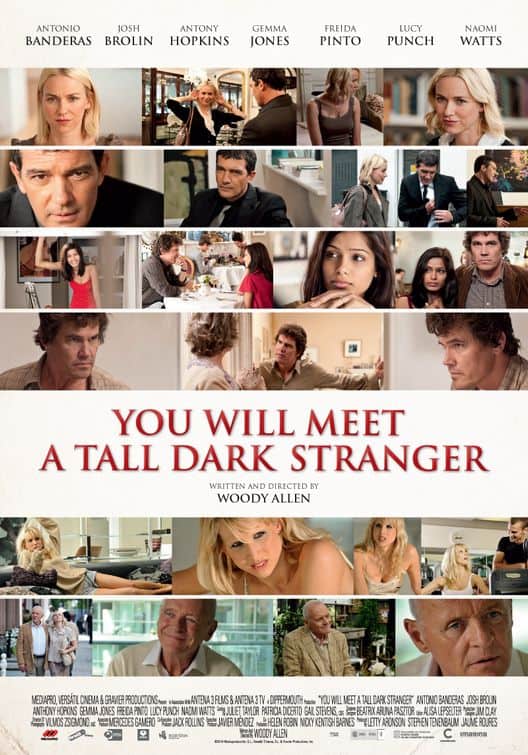 Helena has been deserted by Alfie, the man she was married to for 40 years. She financially supports their daughter, Sally, who works in an art gallery and is married to a struggling writer, Roy. Helena has been at a loss since the divorce and has taken to visiting her daughter daily, which puts a strain on Sally’s marriage and in an effort to distract her mother, she puts her in touch with a clairvoyant who she knows to be a charlatan.

Ensemble pieces can be likened to spinning plates; if one is left unattended for just a second too long, it loses momentum and crashes to the ground, which is rather what happens in this film. Helena is the only character with any kind of appeal or humor, but so little time is spent with her we never become intimate and when the husband who deserted her falls on his sword we crow because a smug man gets his ass kicked and not because of Helena, who couldn’t be a bitch if she tried.

Roy’s angst-ridden, failing writer storyline is something we have seen a million times before, but there is a most magnificent twist towards the end which, unfortunately, is left undeveloped and instead Roy spends time with a female neighbor who looms too large and this storyline, like the others, has no impact on the rest of the characters. It would have been so easy to link Ray financially to the entire family, thus ending with the falling dominos that would swallow up the story and make it whole. But Woody just wasn’t in the mood.

The UK were very excited when Woody Allen landed on their shores, so excited, in fact, that they started financing his films, but it appears the love affair is now over and Tall Dark Stranger has been financed in Spain, which means Woody is having to move further south to get money for his films. This could be good news for non-Woody fans, because if he carries on in the same southerly direction, with the same success, he’s going to end up in the Congo with only snakes to keep him company. How apt is that?