Although Zohan Dvir (Adam Sandler) is the best counter-terrorism commando in the Israeli army, the national hero doesn’t see himself as a career soldier. Rather, he dreams of the day when his services as a spy will no longer be needed so that he will be free to emigrate to America to open his own beauty salon.

But such a move would definitely disappoint his parents (Dina Doron and Shelley Berman), since his patriotic father is a veteran who served in the ’67 War when Israel defeated seven hostile Arab neighbors in six days. Plus, his folks see hairdressing as a gay profession which might turn their son into a “fagela,” a Yiddish slur for gays.

Nonetheless, Zohan’s patience runs out when he is asked to track down The Phantom (John Turturro), a Palestinian terrorist he’d already captured previously. However, the maniacal murderer was recently released from jail as part of a prisoner exchange, and he’s now back on the streets and up to his old tricks.

Seeing no end in sight to the neverending, millennia-long Arab-Israeli conflict, Zohan fakes his own death and disappears, resurfacing in New York City under an alias as the flamboyant Scrappy Coco. There, he applies for a job as a stylist at a leading salon, but is turned down because of a lack of experience.

Willing to work his way up, Scrappy settles for a position sweeping the floor at a fledgling beauty parlor owned by Dalia (Emmanuelle Chriqui), an apolitical Palestinian who has no idea that her new employee is an AWOL Mossad agent. Meanwhile, Zohan, who passes himself off as half-Australian/half-Tibetan, is equally unaware that his gorgeous boss’ brother, Fat-tush, is none other than his militant Muslim nemesis, The Phantom.

So, it’s only a matter of time before the truth is revealed and everything has to come to a head in a big showdown. In the interim, alter ego Scrappy takes advantage of any opportunity to make his mark on Manhattan by behaving in the sort of sophomoric fashion we’ve come to expect of an Adam Sandler. Thus, we have to endure an annoying Israeli accent for the duration while being treated to the supposedly funny sight of him brushing his teeth with hummus, playing hacky sack with a live cat, and making love to his elderly landlady (Lainie Kazan) right in front of her mortified son (Nick Swardson).

Directed by Dennis Dugan (Happy Gilmore), You Don’t Mess with the Zohan is a throwback to the sort of sloppily-edited, crude fare which first made Sandler famous. This bawdy insult to the intelligence is likely to resonate only with his rabid fans nostalgic for flashes of that locker room brand of humor, such as the tasteless scene where guys take turns fantasizing about sleeping with Cindy McCain, Michelle Obama, Laura Bush, and both Hillary and Chelsea Clinton. 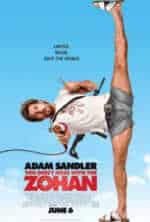 To work in all of these extraneous characters, the film ended up surprisingly over-plotted, featuring more distracting sidebars than one might care to keep track of, especially in a comedy going more for the crass joke than a coherent storyline. Afterall, the aim here is to elicit laughs via generous helpings of homophobia, misogyny, animal cruelty, bodily function slapstick and ethnic stereotyping, an 11th hour appeal to tolerance notwithstanding.

Can anybody explain to me how a flick this raunchy earned a PG-13 rating?