Terminally-grouchy Ben Singer (Matthew Broderick) is a miserable loser having a midlife crisis. The divorced, unemployed stoner mostly fritters away his time getting high in his Shreveport apartment. He can’t even pull himself together for his emotionally-estranged, 11 year-old daughter (Jodie Ferland) when he has custody of her during visitation every other weekend.

In fact, his only constructive relationship is with his roommate, Ibu (Michael K. Williams), a Senegalese immigrant, since they enjoy playing chess while chatting. But then even that escape gets ruined the day Ibu has to be rushed to the hospital in a diabetic coma.

This relentlessly-depressing premise sets the tone for the magical transformation to come in Wonderful World, a bittersweet dramedy written and directed by Joshua Goldin. For Ben gets a new lease on life and a shot at redemption when Ibu’s attractive sister Khadi (Sanaa Lathan) arrives from Africa and decides to share the flat with Ben until her sibling is stabilized. 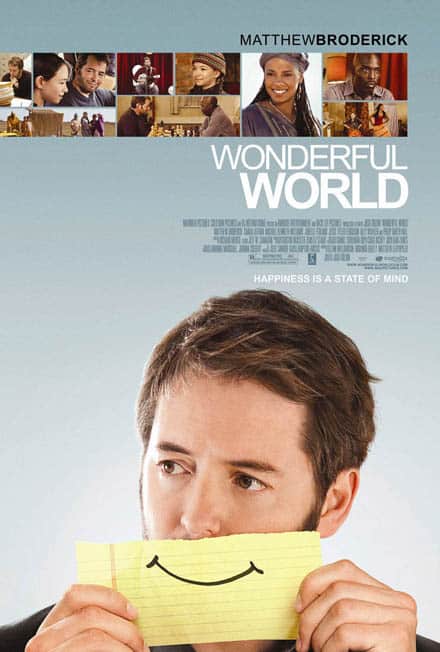 The two proceed to fall in lust immediately, although Matthew Broderick and Sanaa Lathan generate little in the way of screen chemistry, unlike her previous Jungle Fever outing opposite Simon Baker in Something New. The problem is that there’s a permanent, pre-pubescent boyishness about Broderick, which leaves him less than convincing in a romantic lead. Nonetheless, if you can forgive the inauthentic clinches, the rest of the script is at least well-enough executed to earn this sufficiently entertained critic’s a stamp of approval.

Rated R for profanity, drug use and sexuality.

To see a trailer for Wonderful World,