This is an entertaining film, steeped in reality with fleshed out characters that remain long after the credits have rolled. Humor is never far away and, as we go on our journey, we realize this is a story about finding out where we belong, and doing whatever it takes to get there.

Mike Flaherty (Paul Gianatti) has an ailing law practice, the demands of a young family and serious symptoms of stress. When one of his clients needs a legal guardian he is unable to resist the lure of the monthly fee and, despite knowing it’s unethical, takes on the role. He discusses everything with his friend (Terry Delfino), but nothing with his wife, Jacqui (Amy Ryan), so when his client’s relatives turn up on his doorstep, Mike has a lot of explaining to do. 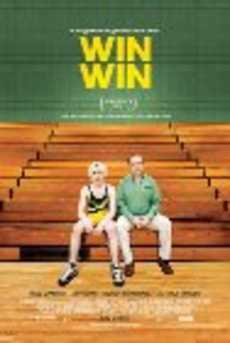 There are two worlds created in this film. The first is the one with Mike the family man, who makes us worry that he will have to suffer the repercussions of his foolish mistake. We will him to find the wit to keep his wife and daughters safe and cross our fingers that he’ll be able to make the next payment for his family’s health insurance. The second world is the high-school wrestling team where Mike and his two buddies coach. The talents of these three nowhere near match their passion, but that’s what makes them so compelling and we urge them on as they try so hard to make themselves greater than they really are.

All the characters ring true, but it’s Mike’s wife, Jacqui, who wins our hearts. This little lady can rock the cradle, knock it out of the park and turn enemies to stone without losing a scrap of her femininity. She protects her children with the ferocious mien of a tigress, at the same time sweeping waifs and strays into her nest if she thinks they need her help; whether or not they actually want it is quite irrelevant, as Jacqui always knows best.

The eloquent writing keeps the pace going right until the end, but then the story suddenly flounders and instead of high drama in the court room, an agreement is quietly reached. These final moments resolve all issues but leave us with the lowbrow message that doing the wrong thing comes with a price tag, but, ultimately, that price doesn’t always have to be paid. It’s not the kind of do-the-right-thing theme Hollywood normally goes for but sometimes maybe it’s not such a bad thing to let the morally murky win the day.