New Yorker Joy McNally (Cameron Diaz) has just been unceremoniously dumped by her fiance at a surprise birthday party she threw for him. Meanwhile, somewhere across town, slacker Jack Fuller (Ashton Kutcher) is being fired from the family business by his bitterly disappointed father (Treat Williams).

Both of these sad sacks venture to Vegas to lick their wounds, Joy accompanied by her best friend, Tipper (Lake Bell), Jack by his buddy, Hater (Rob Coddry). Fate conspires to have the four cross paths when their hotel accidentally assigns them to the same room. 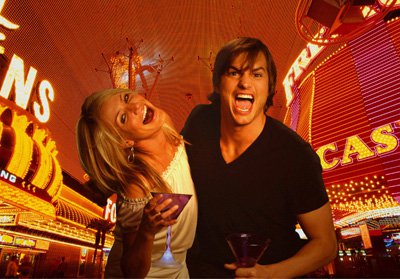 And although misogynistic Hater and man-hating Tipper instantly dislike each other, Joy and Jack hit it off so well that they impulsively decide to get married after a night of imbibing and debauchery. However, by the time their hangovers wear off the next morning, they realize they have nothing in common. So, saner heads prevail and the newlyweds agree to get a quickie divorce.

But as they are about to go their separate ways, Jack deposits one of his bride’s quarters in a slot machine, and wouldn’t you know he hits a $3,000,000 jackpot. Because they can’t agree on how to divvy up the cash amicably, the greedy couple ends up in divorce court where the judge (Dennis Miller) sentences them to live together for six months before he’ll render a decision. 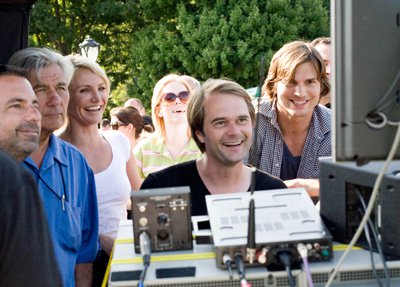 Joy reluctantly moves into Jack’s apartment and the two proceed to drive each other crazy in a standoff with nothing new to offer to anyone already familiar with The Break-Up, The War of the Roses and the rest of the battle-of-the-sexes genre. He gets under her skin with such alpha-male antics as urinating in the sink, leaving the toilet sink up and taking popcorn from a bowl after scratching his genitals.

She’s no angel either, and gets advice on how to torture her hubby from the shrewish Tipper. Hater serves the same function for Jack, with Dr. Twitchell (Queen Latifah) being left to referee intermittently during the troubled couple’s court-appointed marriage counseling sessions. 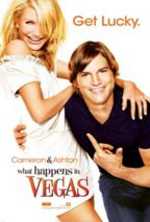 The colorful second bananas’ bawdy badinage turns out to be a lot funnier than that of the co-stars who have little more to offer than their looks and sexual chemistry going for them. A recycled romantic comedy best left in Vegas.