That less might have been much more, is the past tense of an exceedingly wise axiom that could easily apply to The Chronicles Of Narnia: Prince Caspian. But while backwards time travel is just the cure for what ails the troubled kingdom of this handsomely mounted but overwrought tale, the retro blockbuster doesn’t have that particular luxury of hindsight, and must stand on its own merit in the here and now. In any case, to innumerate the scores of parallel plots and key characters with multiple accents of this lavish, battle-besieged extravaganza, would likely require too many pages to accommodate this review.

So to make a long story reasonably short, Prince Caspian is the second in a series of projected epic screen adaptations of the seven C.S. Lewis children’s Narnia fantasy classics, which made its impressive debut with The Lion, The Witch And The Wardrobe. And in weighing the plus and minus factors of this latest Narnia incarnation, Prince Caspian adequately stands on its own as an imaginatively conceived kid power outing, but has the misfortune of being a hard act to follow on the heels of its more vibrant and enchanting predecessor, The Lion, The Witch And The Wardrobe.

Prince Caspian finds the Pevensie children, those former kings and queens of old, returning to Narnia over 1300 years later from World War II England. They make their not exactly grand entrance back to antiquity by way of the Strand underground subway station, near Trafalgar Square, rather than the relatively more conventional wardrobe.

Joining the besieged Prince Caspian (Ben Barnes) in his hour of need are the erroneously reported extinct regal quartet Lucy (Georgie Henley), older sister Susan (Anna Popplewell), Edmund (Skandar Keynes), and Peter (William Moseley). Facing off against the evil despot King Miraz (Sergio Castellitto) and his armies of bad guys with worse aim, the resourceful youngsters are aided by a host of at-risk mythological woodland creatures, including hairy centaurs, warrior rodents, a badger in a tree trunk, and one temperamental dwarf, Trumpkin (Peter Dinklage) they save from drowning. 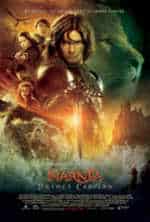 The Chronicles Of Narnia: Prince Caspian is much too immersed for its own good in endless, raucous battle scenes that offer little suspense, given that we’re already tipped off to the sequels featuring the certain victors. And arriving too little and too late to dramatically salvage the proceedings, though with breathtaking entrances into the mayhem, are Aslan the Lion (Liam Neeson) and Tilda Swinton’s iridescent White Witch.

Perhaps too dark in many spots to enthrall younger children, the crowded spectacle does get a welcome breather in its lighter, humorous interludes, courtesy of funny expert filmmaker, Andrew ‘Shrek’ Adamson. Especially whenever that swashbuckler mouse Reepicheep (Eddie Izzard) turns up to lighten the narrative load and strut his silly swordplay.