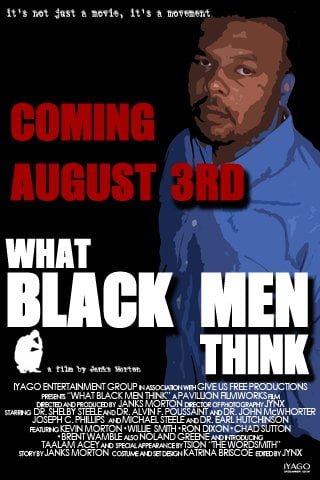 Morton employs the sage adage during his prefatory remarks to What Black Men Think, a thought-provoking documentary which he not only produced and directed, but also appears in it periodically as narrator, commentator and interviewer. The picture paints an enlightening and empathetic portrait of African-American males by employing some rather surprising raw statistics to suggest that we all reconsider some commonly-held beliefs about brothers.

Merely relying on data readily available from government agencies, Morton, pointer in hand, uses graphs, charts and a chalkboard to debunk a litany of popular stereotypes like the idea that there are more black men in prison than in college, that most don’t graduate from high school and that most don’t pay child support. Not only does director Morton expose all these widely-disseminated notions as fallacious, but he suggests that, left unchallenged, they have the ability to do an incalculable amount of damage to impressionable young minds.

All it takes is a cursory glance at the above list to notice that most of the individuals involved are known for being conservative. So excuse me for bracing myself to hear a lot of that blaming the victim nonsense that tends to come from their lips when they’re guests of right-wing TV talk show hosts.

However, I was pleasantly surprised to find that in this format they have been offered an opportunity to expound fully on their hopes and aspirations for black men, rather than being restricted to addressing only hot-button issues in ten-second sound bites. Consequently, each and every one of these elders has some worthwhile advice to share, here, as they cover timely topics ranging from Don Imus to the AIDS epidemic to the use of N-word to black-on-black crime to conspicuous consumption to academic underachievement to “acting white” to brothers on the down-low to the legitimacy of Bill Cosby’s comments.

In sum, What Black Men Think is highly recommended as an excellent alternative to the mainstream propaganda which would have us internalize the worst beliefs about an unfairly maligned segment of society. Perhaps more importantly, this groundbreaking documentary ought to serve as an overdue wake-up call for young African-American males to take Harriet Tubman’s words to heart, and to assume the responsibility of reprogramming their own minds in a positive manner instead of voluntarily internalizing a self-defeating mentality which amounts to little more than the 21st Century’s equivalent of slavery,

Three cheers to Janks Morton for making a film which constructively employs a marginalized segment of the black intelligentsia as a valuable resource. Though often scorned as traitors by their more liberal colleagues, in this instance they are presented as well-meaning role models with viable proposals for their people, as opposed to being the unwitting pawns of a power structure only interested in maintaining the status quo.

Guaranteed to generate quality conversation about the direction of African-Americana.