Don’t let the political-sounding title mislead you. Watching TV with the Red Chinese is a cross-cultural period piece having precious little to do with the dissemination of propaganda behind the Bamboo Curtain. Set in the U.S. in the summer of 1980, this character-driven romantic dramedy is rather about a trio of transfer students’ awkward adjustment to life in New York City.

Born and raised in Communist China, Chen (Leonardo Nam), Tzu (James Chen) and Wa (Keong Sim) initially rely on a steady diet of television programming to understand the strange, new American culture. For their dorm is located in a rough area of the South Bronx, where they end up routinely mistreated, whether getting mugged or merely verbally assaulted with ethnic slurs whenever they venture outside. 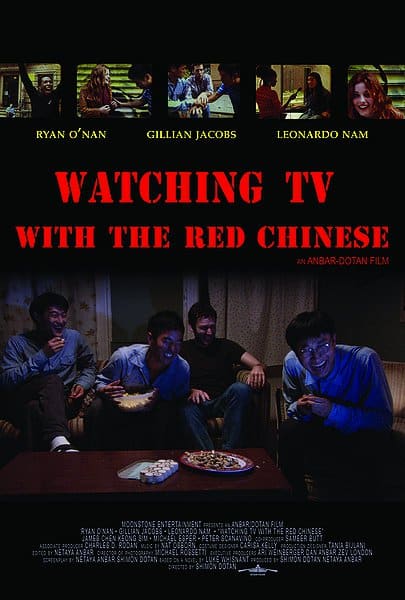 Thus, they are very lucky to be shown the ropes by an affable next-door neighbor, Dexter (Ryan O’Nan), a grad student who decides to teach them everything from how to survive on the streets to how drive a car to how to play touch football. Meanwhile, much of the newcomers’ assimilation is being recorded for posterity by classmate Billy (Michael Esper), an invasive, aspiring filmmaker who figures it might be cool to shoot a documentary chronicling their fresh perspective on the Big Apple.

However, the plot thickens considerably when Dexter discovers that Chen has been secretly sleeping with Suzanne (Gillian Jacobs), his on-again/off-again girlfriend. This lusty liaison also upsets one of her exes (Peter Scanavino), a crazed stalker who starts leveling death threats.

Sensing that his very survival is at risk, Chen purchases a pistol, taking his cues from the way he sees differences settled all around him in the crime-infested ‘hood. So, brace yourself for a very messy finale, for better or worse.

A cautionary tale of innocence lost, delivering a prophetic message with the benefit of 20/20 hindsight that a generation ago America might have already been “a culture in decay.”

In English and Chinese with subtitles.

To see a trailer for Watching TV with the Red Chinese, visit: