If you think television significantly lowers a country’s collective IQ, imagine a nation as a vast idiot box theme park, whose prime minister is also the reigning media empire mogul. Such is the unfortunate case of Italy for some time now, under the tight control of notorious but teflon coated, seemingly immune from prosecution right wing entertainment czar, Silvio Berlusconi. And to such an extent that the trailer for Erik Gandini’s Videocracy, an investigative documentary expose of corruption, collusion and conflict of interest under the Berlusconi administration, was in effect banned from all television stations prior to its premiere at the Venice Film Festival last year.

Gandini, renowned for his documentary uncovering scandals at Guantanamo detention camp, as well as Surplus: Terrorized Into Being Consumers, takes viewers along on a disturbing journey through Italian culture, where little distinction between politics and the media remains. An unholy alliance that began thirty years ago, when Berlusconi began a late night sleazy quiz show, in which masked housewives stripped on air in response to participants correctly answering riddles. And that now extends to his nearly total power over his own Mediaset conglomerate, as well as political control over the state run RAI TV Channels. 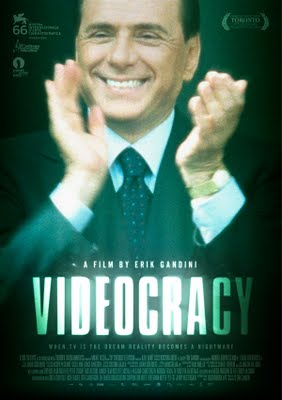 And, with a concurrent lurid exploitation of women that evolved into a regular practice of half naked females known as veline, assigned to dance suggestively in silence as host wallpaper, on Berlusconi’s shows. And whenever Berlusconi – by far the wealthiest and most powerful man in the country – is up for reelection, he airs candidate sing-alongs on his channels, with lyrics that go something like: ‘Thank God Silvio Exists!’

Gandini also spends time with Burlusconi media elite accomplices, penetrating their luxurious haunts and female meat market Billionaires Club. Including enormously wealthy PR agent Lele Mora, who brags to Gandini about his affection for Burlusconi, but who can’t compare to Mussolini. And while playing Mussolini hymns for the filmmaker on his cell phone, tunes accompanied by photos of swastikas. Then there’s Fabrizio Corona, a ruthless king of the paparazzi currently imprisoned for celebrity extortion, who brags on camera that he’s a new and improved Robin Hood because ‘I steal from the poor, and give to myself.’

Videocracy is a scary extreme celebrity vision of a soulless national, politicaly run television culture lacking heart or humanity, and never quite seen in such a sad, dumbed down ruthless context before. Or as one revealing observer puts it: ‘The important thing is to gain power, and do whatever you want.’