Mixing cyberspace and conventional moviemaking into an innovative hybrid cinema, hasn’t been too promising so far. There’s just something not too thrilling about combining cat and mouse chases with your basic couch potato computer mouse. But director Gregory Hoblit (Fracture, Primal Fear) introduces an intriguing, stress-elevating element – You. That is, audience complicity as a spectator sport in premeditated murder, takes on multiple meanings in Untraceable that extend far beyond the theaters. 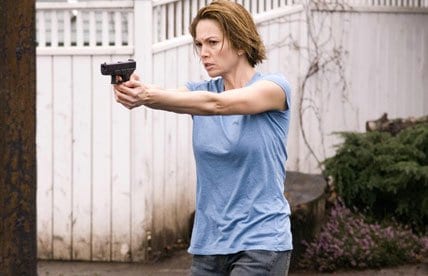 It seems that a mystery killer with highly advanced computer skills, is luring Portland, Oregon residents into his elaborate torture chamber, and streamlining their slow, excruciating deaths online at Killwithme.com, via webcam. far from your typical psychopathic loner with malice on his mind, this killer with exhibitionist tendencies craves a mass audience. And the more viewers log on in increasing numbers, – and well they do – the faster he kills his victims through novel, bizarre methods. Including scores of heatlamps to fry the luckless victim, a drip filled with a blood thinner to induce the bound and gagged individual to bleed faster, and a tub increasingly filling up with sulfuric acid.

Diane Lane, along with her geeky sidekick played by Colin Hanks, set about tracking down the elusive maniac with barely a clue to begin with, and advanced, hi-tech heated Internet conversations that could do with a set of helpful layman subtitles. And without giving too much away, Lane’s character corners her man with resourceful creative maneuvers that may have something to do with a pair of female elbows kicking in as supplementary deadly weapon.

Untraceable conjures a repugnant vision of pathological audience desires – nearly as ugly as perpetrator culpability – taken to brutal ultimate extremes like a nightmarish self-fulfilling prophesy. But the premise that the monster is us – and the public hunger for detailed dastardly deeds – gives rise to the criminal, his craving for attention, and the crime, is really questionable.

For while this particular movie villain dervies emotional satisfaction as the viewer count multiples, who ironically benefits most of all from the cash count numbers at the box office, from audiences drawn to such simulated snuff movies. Not to mention that audience tastes are quite susceptible to being cultivated, and far less a matter of choice than one would be prone to imagine. Resulting in a shrewd fallacy at work here, as to just who is benefiting most at the box office, and it’s highly traceable.