Freedom is a crusade, to be carried on enthusiastically around the earth. -Robert Sargent Shriver, Jr.

Today, it is clear that many people have forgotten that they can make a difference and that what they think and do really matters. However, over the past few weeks, with a resurgence in voter turnout, it appears that people are becoming more empowered and stepping up and serving as instruments of change. One could also say that America’s crusade for greatness, was led by the Patriarch of change, Robert Sargent Shriver, Jr. 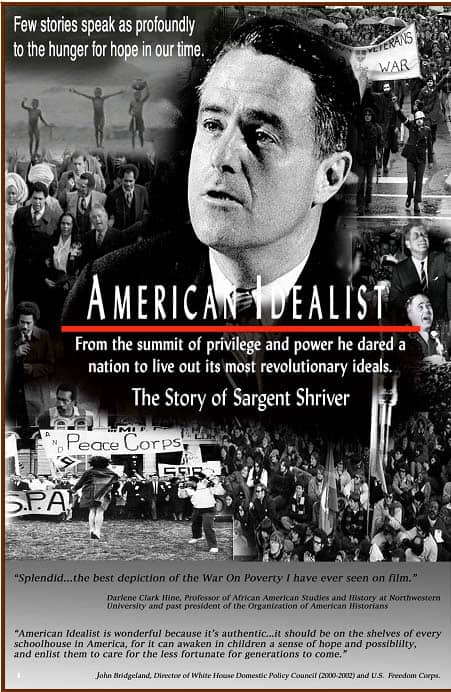 Shiver led a life of service, with a desire to make a difference. Lauded and lambasted for his efforts, many people have heard his name, but don’t know why. Shriver touched the lives of millions and the programs he created continue to do so today.

He created and ran the Peace Corps, which, since 1961 sent over 200,000 volunteers to serve around the world.

Reluctantly, he took the lead on “The War on Poverty,” pressed into that leadership role by President Lyndon Johnson in 1964. Once Shriver conducted research to discover what he was to wage war on, he knew this was something that needed to be done and that he must do it.

Every single person in America knows of at least one thing that he created, but many don’t realize it, because he didn’t promote himself. Sargent Shriver was the leader of many social initiatives, including the Peace Corps and The Office of Equal Opportunity, which spawned Head Start, Youth Corps, and Legal Services for the Poor, VISTA, Job Corps, Upward Bound, Work Study, Community Action and Foster Grandparents.

For all his achievements, Shriver was constantly embattled. President Eisenhower ridiculed the Peace Corps as the “Kiddie Corps.”

Shriver’s commitment to civil rights and the poor led powerful conservative senators to charge that his antipoverty programs exceeded the role of the federal government.

Democratic governors and mayors resented Shriver’s call for community action because it stirred social protest. Even the man who picked Shriver to run the war on poverty, President Lyndon Johnson, complained Shriver had created a “damn revolution.”

Present at many of the watershed events of modern history, Shriver’s vision took shape in a momentous era that included the Depression, the Holocaust, World War II as well as the mass struggle for black freedom.

The documentary film American Idealist tells the story of a man who touched more lives than any American since Franklin Roosevelt.

American Idealist was written, directed and produced by Bruce Orenstein, founder and executive director of the Chicago Video Project, with Maria Shriver as executive producer.

Four years in the making, it is a tribute to Sargent Shriver, idealism, service and tenacity. A powerful film, it shows how one person with ideas and drive can make a huge difference in the lives of others and how they can we swept along, become part of the community and contribute to society. It also shows how people and politics can interact for good as well as the bad.

This film should change that, and I thoroughly recommend it.

Given Shriver’s relationship with Martin Luther King Jr. and his commitment to volunteerism, it is fitting that PBS presents American Idealist, a film about Shriver’s life and vision, on Martin Luther King Day, January 21 at 9 p.m. PT / 10 p.m. ET (Check your local listings).