By the late Eighties, someone was dying from AIDS every half hour in this country, while the government continued to exhibit a shocking indifference to the epidemic, ostensibly because the disease was seen as an affliction primarily affecting homosexuals. First the Reagan administration and then that of George H.W. Bush handled the crisis with a criminal neglect that, in retrospect, many consider tantamount to genocide.

Because of that bureaucratic indifference, a few visionaries like Larry Kramer, Ann Northrup and Phil Reed realized that “This disease will either kill or politicize this community.” Sensing that Silence = Death, they founded ACT UP in order to pressure the government to take the plague seriously.

As one frustrated HIV+ patient explains in United in Anger, “I might not be able to fight the disease, but I can fight the system.” Directed by Jim Hubbard, this riveting retrospective revisits the seminal moments which gave rise to the AIDS activism movement via a combination of archival footage and present-day reflections.

Uncompromising, theatrical and very media-savvy, ACT UP staged attention-grabbing demonstrations at the National Institute of Health, the Food and Drug Administration, New York’s City Hall and any other seat of power seen as dragging its feet. The grassroots organization’s “in your face” tactics worked wonders, gradually forcing politicians to focus on the urgent concerns of a constituency that had previously been pushed to the margins of society.

A telling reminder of just how effective civil disobedience still can be when you tap into a forbidden emotion and unleash the requisite righteous rage needed to challenge an intransigent authority in a collective and constructive fashion.

To see a trailer for United in Anger: 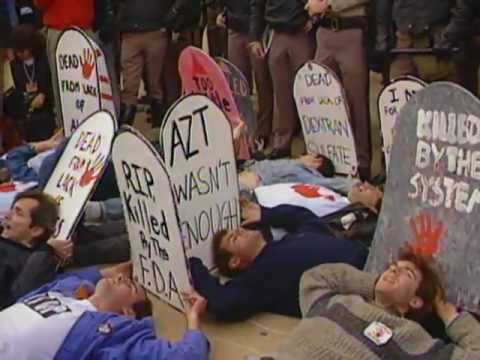