This is a cautionary tale about the dangers of teenage girls using chat rooms but, as this is already universally known, the warning is redundant. What is needed are guiding insights and attempts to find answers, but this film offers neither and we learn nothing about coping, communicating or the predators who prowl behind their electronic curtain.

Will (Clive Owen) and Lyn Cameron (Catherine Keener) have three children, one of whom is 14-year-old Annie (Liana Liberato) and, like most teenagers, she spends most of her life online. She visits a volleyball chat room where she meets 16 year old Charlie, and their online romance begins. Liana’s parents know of Charlie’s existence and assume he’s the person he claims to be. 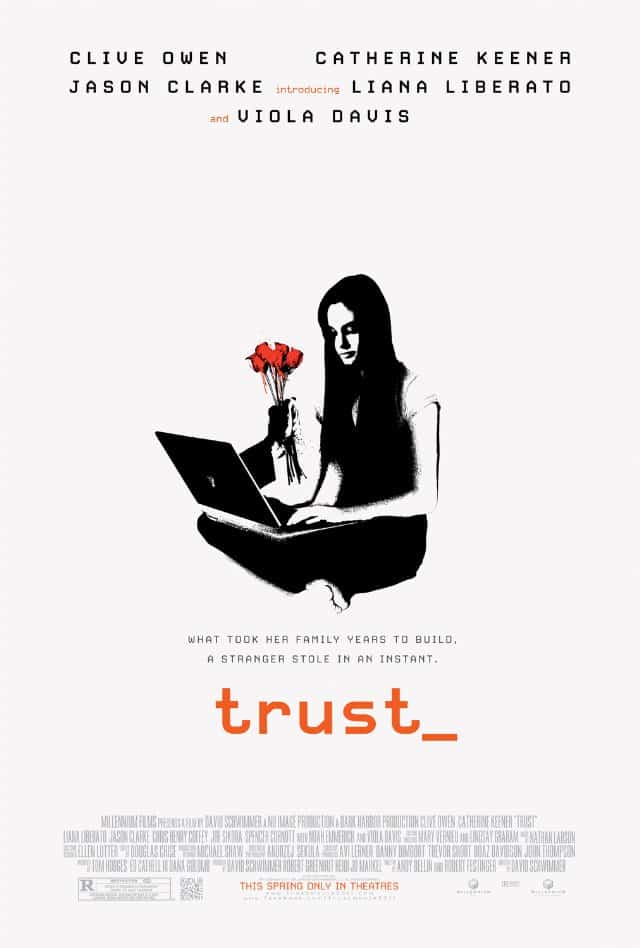 The writers fall into the usual trap of setting up the family as perfect, which not only makes them unrelatable but, in this case, diminishes Liana’s need to seek attention from elsewhere. Had her parents been ignoring her, it would give her good reason to turn to an online friend and, while this might not be the case in real life, it’s how it works in the movies. Also, Liana’s a pretty girl with a charming personality who would have no problem getting a boyfriend but she is only interested in meeting boys online, which really begs an explanation.

At first it appears this story is going to be told from Liana’s point of view, but then it shifts and becomes her father’s story, so instead of getting the goods on Liana we spend time at Will’s board meetings, or listen to him confide in his boss. Not only is this not interesting, but it makes us miss the moments when Liana stumbles and we only get to see when she falls. If the point of view was going to be split, it should have been with the predator, so we could witness him lace his trap with honey and watch, powerless, as an innocent slips inextricably under his drooling spell.

When the finale finally comes, everyone simply starts being nice to each other and no kind of resolution or message is offered. There is, however, a quote from the filmmakers saying “we hope this film starts a dialogue between parents and their children about internet safety.” There’s really no reason why it should and, apart from anything else, hope is not a strategy.