Somewhat aptly described as Twilight With Chopsticks, though that particular utensil is essentially bypassed for more novel devices like swiped patient IVs in this Korean feeding frenzy thriller, Thirst conjures a confusion of human appetites in conflict with spiritual misgivings that pale in comparison. Director Park Chan-wook (Old Boy), notorious for his lavish display of stylish irreverence, apparently picked up the Jury Prize this year for this comical meditation negotiating reluctant blood binging with Chan-wook’s own very personal lapsed Catholicism.

Sang-hyun (Song Kang-ho) is a young priest who offers himself up as a martyr as part of an experimental program in Africa to test a controversial vaccine intended to counter a deadly virus. But after receiving a tainted blood transfusion, Sang-hyun is transformed into a vampire. At the same time, his miraculous recovery as the sole survivor of the pestilence, brings him unwelcome celebrity as a faith healer dubbed The Bandaged Saint. And when Tae-ju (Kim Ok-vin), the abused wife of an ailing childhood friend makes a play for the never-been-kissed cleric, both her seductive overtures and alluring bodily fluids are impossible to resist. 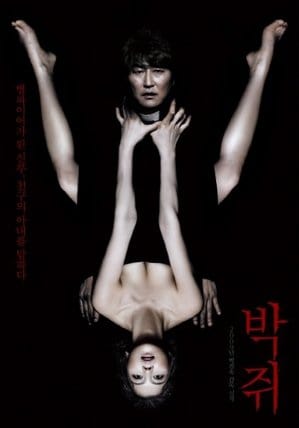 With this steamy and sordid triangle the least of his current worries, Sang-hyun frets over various strategies to feed his addiction without actually killing anybody (a colleague kindly offers him a sip from his circulatory system now and then), and at the same time keeping his libido under control via sexual self-flagellation. And while an advocate against vampire prejudice (‘people don’t blame those with cancer’), the perplexed priest is dragged seemingly against his will into indiscriminate human slaughter by his increasingly depraved and out of control lover.

Thirst has its share of comically gory interludes, but with a running time clocking in well over two hours, this guzzler banquet overstays its welcome like a supersized beverage that’s lost its kick some time ago. Though there’s much to learn about the art of vampiring here. Including more efficient corpse feasting by cutting the feet of your human dispensers off at the ankles and hanging them over the bathtub to drain, and what a turn-on a freshly punctured pierced ear can be.