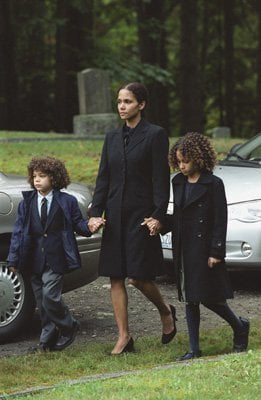 Audrey (Halle Berry) and Steven Burke (David Duchovny) are living the American Dream after eleven years of marital bliss. The successful architect and stay-at-home mom are still in love, and sitting in the lap of luxury in a suburban Seattle McMansion with their adorable, identically mop-topped kids, Dory (Micah Berry) and Harper (Alexis Llewellyn).

However, this picture-perfect family’s fortunes are irreversibly dashed the day that Good Samaritan Steven rushes to the assistance of a domestic violence victim and is slain on the spot by the woman’s incensed husband. Given the unanticipated loss of her partner and provider, Audrey suddenly finds herself facing the prospect of both raising the children and meeting the monthly mortgage alone.

Hope arrives where the emotionally-fragile widow least expects it, in the person of Steven’s best friend, Jerry Sunborne (Benicio Del Toro), a ne’er-do-well she almost didn’t even invite to the funeral. For, ever since this disgraced attorney had become a homeless heroin addict, Audrey had not allowed him anywhere around the house.

But there was something charming enough about this chain-smoking junkie to cause Audrey to let her guard down against her better judgment, and impulsively suggest that this Latino version of Brad Pitt move into the vacant apartment above the garage. Then, on the condition that he promises to attend Narcotics Anonymous meetings and find a job, she also lets him serve as a surrogate dad to Dory and Harper, who miss their father terribly. 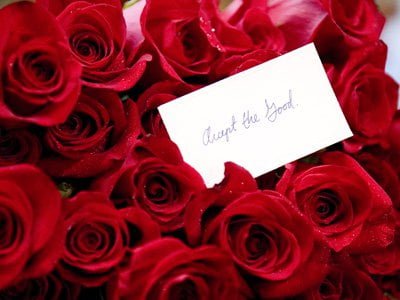 A month or so later, we find Jerry cleaned up quite nicely, thank you, and gainfully employed by an affable neighbor (John Carroll Lynch) in the mortgage business. By now, he’s bonded with the kids and has Audrey swooning and cooing, “You look good” as she peers into his bedroom eyes.

As one might suspect, it couldn’t possibly be that easy for the Burkes to get over their grief or for Jerry to kick his drug habit. Otherwise, Things We Lost in the Fire All would’ve lasted less than a half hour. No, complications do ensue, and the balance of the picture is devoted to dealing with the fallout of assorted relationship issues and personal failings.

The subsequent sequence of events presented by this implausible melodrama unfolds more like a TV soap opera than a drama you’d expect to see in full-length feature. Danish director Susanne Bier (After the Wedding) ought to thank her lucky stars that she landed a couple of Oscar winners like Halle Berry and Benicio Del Toro to play her lead roles, given that their impassioned performances are all that prevent the production from looking absolutely laughable.

Nonetheless, the dumb dialogue occasionally elicits unintentional laughs. For instance, there’s the point in the film where, after Jerry has relapsed, Audrey pressures him to share some dope with her, asking “What’s heroin like? I want to know what it feels like.” This development is ridiculous because nothing previously prepared us to think the doting mom might be inclined to imbibe. The story hits similar false notes when Earth Mother Audrey inexplicably encourages her boarder to smoke cigarettes in the house, and when she appears to take it in stride after finding him nodding off in the shower, fully-clothed. 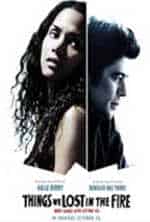 How about this exchange which reads like it was torn out of a corny romance novel? Vulnerable and very needy Audrey: “Am I ever going to feel beautiful again?” Suave and debonair Jerry: “You’re the most beautiful woman I’ve ever seen.” Excuse me, but wasn’t this movie supposed to be about the loss of a husband, not about losing your looks?

It doesn’t get any more shallow than this.

Rated R for profanity and pervasive drug use.