If you’re looking for a sophisticated new take on that hackneyed old werewolf theme, and if you enjoy sharp, succinct dialogue and memorable characters, whatever you do, don’t go and see The Wolfman. But if you’re looking for a B horror movie that regurgitates every tired cliche in the How to Terrify Your Audience Handbook, go and see it, because it’s just up your street.

The film begins with a full-on image of a raging Wolfman murdering his helpless victim, and with such a high octane start, I wondered where this movie could go from here. For the answer and spoilers galore, read on.

Lawrence (Benecio Del Toro) has been contacted by his brother’s fiancee, Gwen (Emily Blunt), asking him to return home to help search for his missing brother. Lawrence turns up at the foreboding manor house to be greeted by Sir John Talbot (Anthony Hopkins) and a direct descendant of one of Damian’s dogs (like those poor Rotties need more bad press). Sir John informs Lawrence that his brother has been found dead, torn apart, according to local gossip, by the gypsies who recently moved into the neighborhood.

Pretty soon we’re subjected to the obligatory flashback, which shows Lawrence finding his mother, gauged and blood spattered, in his father’s arms. This gory incident happens in the dead of night in the isolated family manor and, despite overwhelming evidence, Lawrence takes over an hour in film time to grasp the fact that his father murdered his mother, which is a long time cinematically and seems even longer if you happen to be watching a bad werewolf movie. But I digress.

Needless to say, a starchy Scotland Yard super sleuth turns up for the locals to rally behind and form the mandatory posse. In the ensuing hunt to find his brother’s killer, Lawrence visits the gypsy camp, but on his way home gets bitten by the werewolf (who’d have thought?) and is carried back to the gypsy camp where the head honcho says he can be cured by love, but when Gwen drops by a day later to ask her how she can save Lawrence, the gypsy woman says she can’t. This made me think the locals were right about the gypsies in the first place and you just can’t trust them.

There’s talk of silver bullets and full moons; Sir John tricks the posse into believing that Lawrence is the werewolf who murdered his son; Sir John gets Lawrence committed to an asylum where he gets the proverbial electric shock treatment and the 19th Century version of water boarding. Lawrence escapes, goes back to the manor, Sir John beats him up with a cane; Sir John and Lawrence turn into werewolves; a fire starts and Sir John ends up being chucked on it by Lawrence. Phew. Glad that’s over.

In amongst this mayhem, the dead brother’s fiance flits about on her white horse (everyone else’s was black) and making out with Lawrence even though she knows there’s a very strong chance he’s a werewolf. Apart from the obvious ethnic difficulties this liaison would present, I personally think it’s a little shabby to start dating your fiance’s brother before he’s even cold. But that’s just me. Just after Lawrence chucks Sir John onto the fire, Gwen decides to visit him at the manor and gallops away from the posse.

The posse take chase but for some unexplained reason not only do they fail to catch up with her (how fast can you go without riding boots and a decent pair of jodhpurs?) but they never actually appear at the manor and the next time we see them they’re in the forest. However, from a plot standpoint this turns out to be a good thing because that’s where everyone else shows up, just in time for the finale. I’m sure you can fill in the tragic ending for yourselves, but in case you need any help, Gwen did it and not the posse.

Apart from all of the above, a few other things bothered me.

To go on this ninety four minute journey, we really do need to relate to at least the main character, but this proved difficult. We all saw Sir John’s eyes flash yellow about ten minutes in and while I can understand Lawrence being in denial about his mother’s grisly demise, ignoring those eyes made me think he was in dire need of a reality check and maybe a bite from a werewolf was just the thing. And then there is the Kangaroo Court in the asylum – why do they always bring in someone with a German accent when there’s a whiff of torture?

It’s just so offensive – not to the Germans, they don’t take any notice anymore, but the audience really doesn’t need those kinds of add-ons. There is also some pretty dumb dialogue, in particular Gwen’s “what are you afraid of?” to Lawrence at the height of the beast’s terrorization of the petrified villagers. Also, the “ancient curse of the village that turns the bitten into werewolves” is mentioned more than once. I understand that us Brits like to think we’re a cut above, but werewolf behavior is pretty universal and if there is a curse on that quaint little hamlet, the residents need to look elsewhere and the filmmakers need to get out more.

This movie, already teetering on the brink of satire, finally goes over when a pair of interior doors swing closed all by themselves (which worked so well in Paranormal Activity), and trap thirty burly men in the same room as the werewolf. Watching them all hurl themselves at the door to no avail was, frankly, comical.

This is a remake of the 1941 version and there’s no reason why it shouldn’t work unless, of course, you keep the same story and simply add 21st century special effects. That’s just plain lazy. Someone did decide to change the title from The Wolf Man to The Wolfman, a nod to our ‘branded’ new world, but they then paid no heed to the thousands of werewolf movies that have been made since the forties. That’s just plain arrogant. 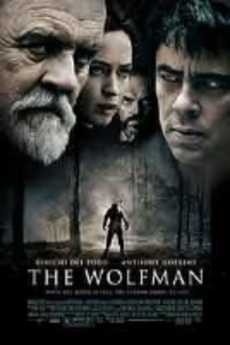 Benicio Del Toro, Emily Blunt and Hugo Weaving were a one note throughout, Anthony Hopkins was as magically commanding as ever, but had so little to do he got bored and decided to experiment with his Irish, English and Welsh accents. As he technically was two different people I could have gone along with two, but three is definitely OTT.

The budget was $85M so it’s difficult to understand why the producers couldn’t stretch to a competent script supervisor and avoid the many wardrobe and continuity blunders. In B movies you expect that kind of thing, which is why I would reiterate my advice and tell you to stay home and rent a B horror movie as that’s what you’ll be getting from The Wolfman.

Writer: Andrew Kevin Walker, David Self, based on the motion picture screenplay by Curt Siodmak.