Despite the fact that all of the principal cast members have returned for the sequel, New Moon pales in comparison (pardon the expression) to the scintillating original which landed on this critic’s Annual Top Ten List a year ago. Since the new production retains the services of the same scriptwriter, the obvious explanation for the difference in quality is the replacement of Catherine Hardwicke with Chris Weitz as director.

After all, most of the movies on Mr. Weitz’s resume’ are comedies, including such hilarious hits as Down to Earth and American Pie. So, it makes sense that he would opt to infuse this flick with lots of lighthearted levity. But a big reason why Twilight 1 worked so well was that rather than break the tension with comic relief, Hardwicke wisely chose to let it to continue to build, thus ratcheting up the intensity in a manner that made for a bone-chilling experience. 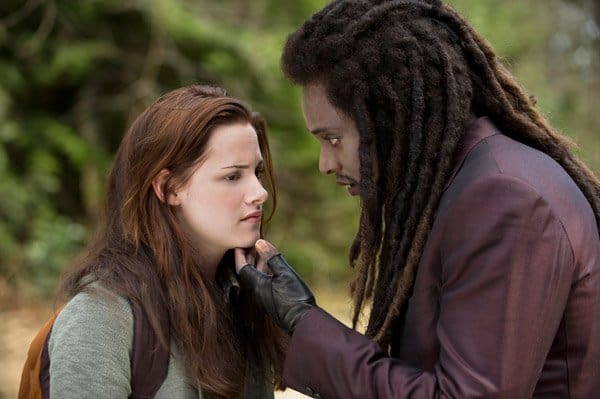 By comparison, Twilight 2 arrives not only riddled with jokes but punctuated with distracting pop culture asides, as if desperate to sound contemporary. For instance, there’s the scene where Bella (Kristen Stewart) brushes off Jacob (Taylor Lautner) with, “I’m not into that ‘Cougar’ thing,” because she’s a couple of years older than her solicitous, 16 year-old suitor. Or how about when we hear another character refer to the H1N1 virus by saying, “He probably has that flu that’s going around.”

Equally annoying is when the potentially shocking revelation that Jacob is a werewolf is immediately undercut by the punny quip “Guess the wolf’s out of the bag.” On another occasion, potentially-menacing werewolves are merely dismissed as a harmless “pack of mutts.”

All of the above notwithstanding, Twilight 2 remains a review-proof adventure certain to keep its intended demographic enthralled for a couple of hours, specifically, those teens weaned on Stephenie Meyer’s popular quartet of otherworldly romance novels. This installment revolves around a love triangle in which Bella, a human, finds herself torn between Edward (Robert Pattinson), a vampire, and Jacob, the aforementioned werewolf.

Who am I to quibble with a patently-preposterous, escapist fantasy which never takes itself seriously, yet somehow still resonates perfectly with the overly-sentimental, puppy love inclinations of passionate, prepubescent females?

Rated PG-13 for violence and some action.