If going to the movies to get stuck in the subway for two hours may not be something that sounds like a swell plan for getting away from it all for an evening out, the underground thriller The Taking Of Pelham 123 is not likely to change your mind on that score. A movie about a heist on a midtown subway train targeting a car full of passengers, The Taking Of Pelham 123 might leave audiences feeling a lot like hostages themselves for the duration, at the hands of director Tony Scott. Who seems to have a bit of a contact high with all the grating noise, grit and funk of runaway trains, while he just about forgets why he’s there to make a movie. Somebody needed to put the brakes on this guy too.

Loosely based on the Joseph Sargent 1975 classic of the same name, the film is just as much a remake as an observation into how radically the way movies are made, has changed over the decades. While story, characters, the historical moment and emotionally charged intensity once ruled on screen, now it’s all about the hardware, and how flashy the latest show-and-tell director wielding the inanimate production values, can be. And The Taking Of Pelham 123 would simply be all that and nothing more, were it not for the powerhouse cast struggling for some dramatic elbow room in between, including Denzel Washington, John Travolta, Luis Guzman and John Turturro. 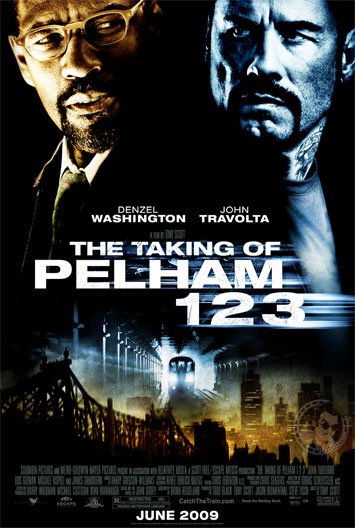 Washington is Walter Garber in The Taking Of Pelham 123, a meek train dispatcher who’s been demoted from a top position for bad behavior. When a loose cannon gang leader (John Travolta) who facetiously favors being called ‘Ryder’ for the time being, takes a trainload of passengers hostage in exchange for big bucks from the city coffers, he gets a particular liking for Garber as intermediary at the other end of the MTA command and control center phone line, and won’t settle for any other.

More focused on the dangers of riding the subway – whether a hostage of a madman or MTA bureaucratic incompetency on your average commute – Scott tries audience patience with his obsession for dizzying camera moves and film derailment in the pursuit of an overload of extreme closeups, while character scrutiny tends to remain skin deep. In other words, a runaway train should not be the awesome centerpiece of a movie, more than upstaging collisions of the human kind. Though Washington does get a few choice sidebar moments to imbue his character with uncommon depth, highlighting a rare untidy notion in movies these days of basically good people doing bad things.

On a side note, the movie is likely to seem a whole lot less realistic to local audiences. For instance, how can a subway train be moving south through midtown, and then end up basically exactly where it started from, under the Waldorf. Not possible. Meanwhile, there’s some undetected sexting going on underground, when the subways haven’t been wired up to do so. And any transit official who’s been on the job for at least five minutes, would have brought the system to a halt and stopped running all those trains on schedule, right past the scene of the crime.