Surrounded by a menagerie of bizarre when not silly fellow citizens, the undead former rookie cop Denny Colt now morphed into The Spirit, runs interference with mixed results against Sam Jackson’s fiendish extreme villain, Octopus and his shrewd sidekick Silken Floss (Scarlett Johansson). More than evening the odds, Silken surrounds herself with a murderous crew of homicidal fatty clones like an underworld Madonna bossing around an obedient crew of bad and badder boy toys. 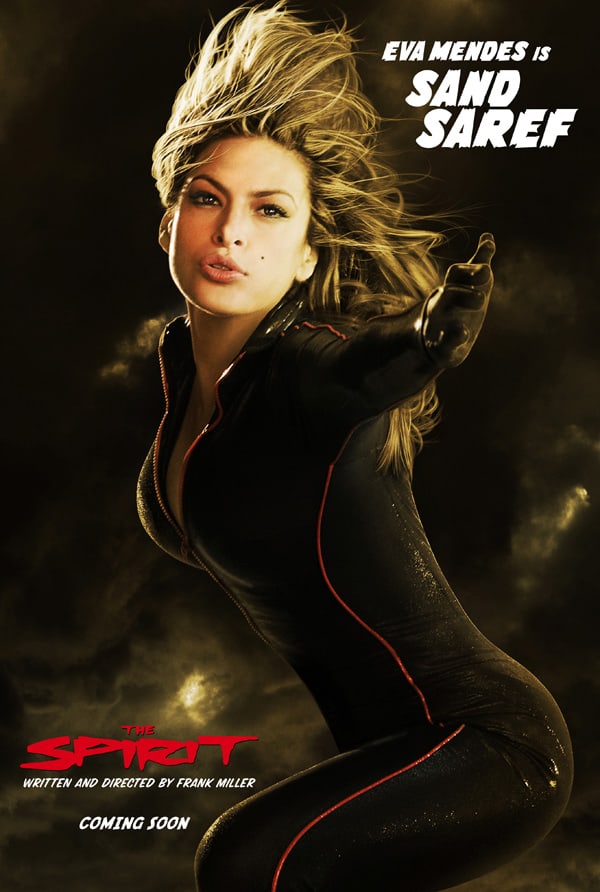 In the midst of perpetually picking up the pace of all sorts of erotic when not surreal sleuthing, Miller backs up for a coming of age, mean streets interlude when a smitten young Denny got dumped by materialistic teen hottie Sand Saref, (played in smoldering adulthood by Eva Mendes), who’d rather follow a career trajectory lusting after diamonds, when not stealing them. Though turning on the seductive charm in her avaricious vocational pursuits is Sand’s prime specialty, as when Eva’s aspiring femme fatale shows she really knows how to drop a towel and reveal butt when not kicking it, in squirming her way out of an arrest by that vigilante old flame. Meanwhile, turning up periodically to do the female doormat thing to Spirit’s quickie serial monogamy, is moping, unrequited emergency room physician tending to the masked male chauvinist’s periodically drippy wounds, Dr. Dolan (Sarah Paulson).

In between stints as cooperative cabbie Liebowitz ferrying The Spirit around town for a variety of supernatural, outlandish brawls, Miller decks out his fantastical multiple maniacs in stylish fedoras and even more stylized lingo with wit and attitude to spare. And though visually mystifying, the attention deficit disorder narrative meandering may work to perfection on the comic book page, but something about this perpetually unsettled screen scenario stays stubbornly lost in translation.