NewsBlaze News
Home Entertainment Food Nothing Teeny About The Taste Of The Bacontini!

Hey there my fellow Bacon Freaks.

As you know, we’ve been discussing the various versions and competing recipes for the “Bacontini,” otherwise known as the Bacon Martini for quite some time now.

However, I recently came across Brian Abrams’ article over at Chow Magazine and my interest was re-ignited once again as I suddenly felt the need to “wet my whistle” with wondrous wit and whimsy. No kidding, make this right and it truly does taste delicious. You’ve got to try it for yourself! 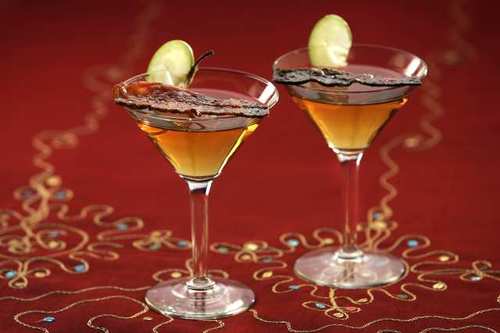 I hope it has the same effect on you as well!

Behind the bar, where the typical bartender macerates pineapple slices in vodka or maraschino cherries in bourbon, the mixologists at the Double Down Saloon in Las Vegas keep an unmarked bottle of vodka in which float several slices of bacon. The off-the-strip dive bar serves its signature Bacon Martini ’round the clock, and quite a few early-morning lushes inhale the pork-belly libation as if it were a Grand Slam from Denny’s.

One of the advantages of infusing swine is that it’s easy to know when it’s ready: When the booze thickens into an opaque, filmy solution, shake it with ice and pour into a traditional martini glass. Sounds easy enough, but does the Sin City hipster actually prefer the taste of Castrol motor oil to the natural bite of quality Russian water?

Quite a few early-morning lushes inhale the pork-belly libation as if it were a Grand Slam from Denny’s.

“Our patrons have very refined tastes, and they will be the first to tell you that progress has passed the Soviets by,” says P. Moss, Double Down’s owner. “Rotgut vodka’s chemical makeup changes with pork fat and turns into a delightfully robust beverage.”

The extremist, dare-you-to-drink-it sort of concoction is nothing new to the happy-hour crowd but still has its devotees. From the 20-something slacker’s Gorilla Fart (Bacardi 151 rum and A1 steak sauce) to the age-old frontiersman’s bourbon-raw egg yolk combo, the shock-tail has established itself as an alternative form of expression for rebel boozers everywhere, as well as a clinching timesaver for those on a serious liquid-lunch diet.

The bacon martini may not offer much good to the palate. (Same probably goes for the Gorilla Fart.) But there is potential in the carnivorous cocktail.

At the Circle Bar in New Orleans, owner Lefty Parker’s Beefytini has garnered near-cult status within his Warehouse District hangout. A dirty martini gone filthy, the $5 cocktail has Beefeater gin for its base, includes a little vermouth, and is topped with a splash of “jerky juice,” a brine mixture from inside an olive jar infused with homemade Louisiana beef jerky. For garnish, a shard of jar-soaked jerky (instead of the usual pimiento stuffing) skewers a hollowed olive.

While a less successful experiment was his Comfort Food (pieces of salami muddled inside a rocks glass, followed by a couple of jiggers of Southern Comfort), Parker swears the Beefytini has a culinary quality about it. “The juniper and the beef jerky mix really well,” he says. “The smokiness of the jerky really allows the good flavor to come out.”

Want to know the recipe for trying this at home:

Lightly mist martini glass with vermouth, and rim the edge with bacon grease.

In a cocktail shaker, mix 3oz vodka, one dash Tabasco, and one dash olive juice.

Garnish with one slice of bacon.