Qualifying in the extreme as a prime candidate for identity crisis cinema, in terms of both its puzzled characters and even more profoundly puzzling lack of its own direction as a movie, The Perfect Sleep may very well precipitate that state for viewers, but buyer beware while awake. The derivative, sudsy crime thriller has just about all the ingredients for a chilling when not brooding atmospheric moodpiece enhanced by a flair for sound and style, in particular a provocative jazzy score, and lacking only one item: a story of substance.

Though boasting the impressive resume of debut director Jeremy Alter, who cut his teeth apprenticing for David Lynch on Inland Empire, The Perfect Sleep may be a case in point of not necessarily the director’s fault at all, but a far too intrusive screenwriter (Anton Pardoe) as annoying omnipresent narrator too, when not also muscling in on the excessively flamboyant proceedings as the protagonist with no name. Though he does have a notorious nickname, apparently – The Mad Monk.

Mad Monk/Narrator is a rebellious underworld player in a city also with no name, who has antagonized his fellow cronies to such an extent, that they’re all out to kill him. And seemingly more than once, because Mad Monk is one of those conventional badass characters who has about as many lives as a cat, no matter how often this punching bag protagonist is dispatched to the brink of the afterlife, and in myriad creatively sadistic ways. 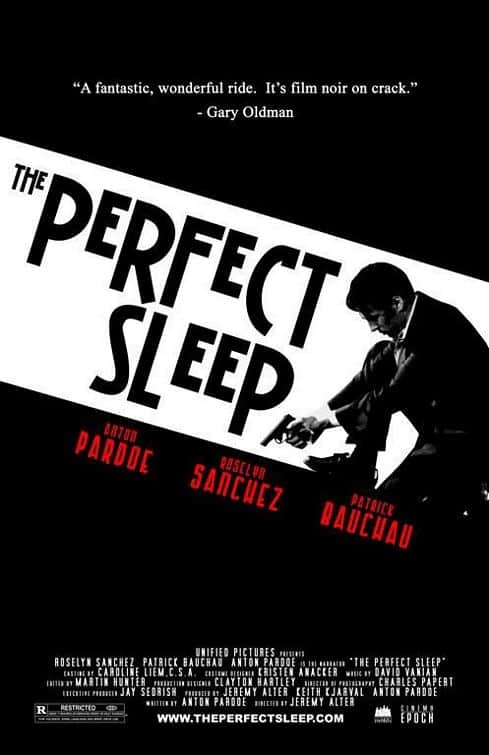 Mad Monk also appears to be some sort of partial amnesiac. In other words, he can sleep, but is driven to attain the elusive perfect sleep. Whatever. There are also a series of hopelessly tangled dysfunctional surrogate family relationships, counting orphans, fatally attracted step-siblings, and also godfathers who may secretly be the real thing, paternity-wise.

The overall impression is that nothing makes much sense in this ridiculously high minded warped narrative, but that the emptiness is brimming with intensity and attitude, along with some inspired night vision footage on occasion, and dialogue delivered as over the top self-serious soundbites. Kind of like a full length music video feature, where the story is always secondary to plentiful posturing.

A little perverse black comedy tossed in now and then, whether intentional or not, provides a bit of relief. As when one of numerous godfathers engages in a pre-assassination dress rehearsal by gracefully carving up a giant liverwurst. Also shedding some light on the inscrutable machinations of this nutty noir, is the perpetually black and blue anti-hero/narrator’s revelation that ‘some of you clever types may think this is a story which could make sense in the end. Wrong.’ Mad Monk, we hear you.