A more sentimental but no less geeky Superbad style crude-lite slice of burb teen life, Bart Got A Room is not so much about prom night renting rituals, as moving metaphorically about in the perplexing space between adolescence and the unfathomable adult world. And the refreshing hormones-in-crisis humor here derives, not from the conventional yearning to attain high school popularity ‘it’hood, but rather treading just above the terror of sinking way down into bottom feeder teen exile. 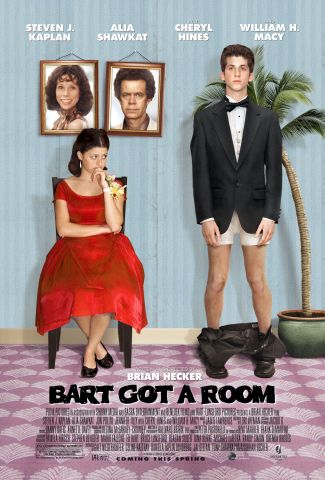 In the interim, the exasperated romantic daydreamer who can’t seem to hunt down an ideal date, has all the incidentals lined up like the limo and tux, courtesy of his recently divorced parents (William H. Macy and Cheryl Hines) in rediscovered heat of their own, as they pursue new and unusual sex partners.

Bart Got A Room projects touching without trite teen loser lyricism consumed in equal measure by broken hearts and broken families. Though with the self-possessed adults bearing the brunt of writer/director Brian Hecker’s resentful satirical tone in this autobiogrpahical outing. While a major disappointment is an all too fleeting ditzy Jennifer Tilly cameo, as Dad’s sexpot chat room blind date who prefers her men ‘like a layer of damp leaves.’

On a side note, this very promising director first grabbed attention with Growing Up With Stress, a short film he made while in high school in which he plays all twelve of his characters. And his forthcoming project for Paramount is to write a biopic for Leonardo DiCaprio about Nolan Bushnell, the guy who launched the videogame revolution in 1972.