A stunning and devastating movie that proves the exception to the rule that a film should focus directly on its subject, and not surrounding issues to convey that essential core, The Messenger is a war movie that delivers its message raw and unfiltered as can be, while bypassing the battlefield.

A kind of odd couple male bonding road movie about damaged soldiers assigned to deliver news to families at their doorsteps about the death of loved ones as casualties of war, The Messenger with its own muted yet implosive brutal psychological intensity, may have more to convey about the toll of warfare, emotionally and otherwise, than combat on screen crafted in the heat of battle.

The Messenger is amazingly the very first feature film directed and co-written by the assured hand of Oren Moverman, an Israeli born filmmaker who knows all too well about his subject, having spent four years in the Israeli army as an infantry soldier, in a country that is itself in a perpetual state of war. Ben Foster stars as Will Montgomery, a soldier recently returned from Iraq who has three remaining months of service to complete in the army.

A brooding loner who appears to be carrying an enormous weight of unspoken post-traumatic stress, Montgomery receives the surprising and unwelcome news that he’s assigned to the Casualty Notification Unit, nicknamed the Angels Of Death Squadron, where his dreaded assignment is to drive around delivering news to local families, about the loss of their loved ones in conflict abroad. 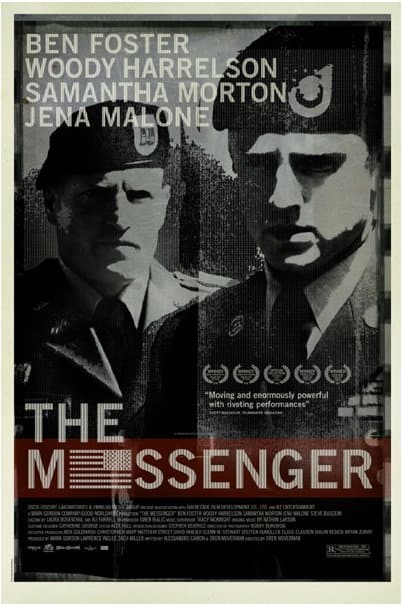 Montgomery is paired in a contentious relationship for this grim task, with boisterous and somewhat unhinged seasoned courier and recovering alcoholic, Tony Stone (Woody Harrelson). Stone has mastered how to psychologically endure and actually convince himself that he excels in his assignment, by adhering to a set a rigid rules he conveys to his reluctant apprentice, even as confronting these instantaneously destroyed families often proves to be unpredictably otherwise.

This emotionally defensive notion that grief can be regulated, includes directions to his underling to be as robotic as possible, not to hug or touch the families or say good morning on a morning that is never good, and especially to get to the house before CNN or Drudge come calling.

Each and every knock at the door of a shocked and disraught kin is nearly as horrifying and heartbreaking an ordeal for the audience, as for the characters. In particular an encounter with Steve Buscemi as an enraged dad, who curses the pair while pointing to a tree in his backyard that’s the very same age as his dead son.

But when they show up at the home of Olivia (Samantha Morton), a young mother who has apparently already braced herself for potential news of her husband’s death at any time, and instead calmly expresses sympathy for the two soldiers about their work, Montgomery is struck with an odd attraction to this woman. And he’s soon developing an awkwardly evolving secret relationship with Olivia and her young child in violation of military procedure, after strangely stalking her around town.

The Messenger is filled alternately with raucous humor revealing the emotional scars within, and wordless meaningful moments that sting with the weight of their authentic and never overplayed despair. But this richly conceived powerhouse drama about life and death is ultimately about the search for a sense of family, whether in peace or war, and what binds humans together despite the most unendurable horrors at hand.