Peter Jackson is fond of making long movies, to wit, each of his previous four films has been at least three hours in length. This latest one, The Lovely Bones, clocks in at a mere two and a quarter, but unfortunately feels a lot longer than that. The movie is based on Alice Sebold’s surrealistic best seller of the same name, posthumously narrated from Limbo by a 14 year-old rape and dismemberment victim as she observes the toll her death takes on her family as her killer remains free and continues to stalk other young victims.

Now an ethereal, disembodied spirit, she finds herself torn between a desire for vengeance and a hope to have her grief-stricken relatives heal. Although the sanitized screen version spares us the gory details of her slaying, it’s otherwise a faithful enough adaptation which falls short in its endeavor to distill the source material’s sentimental, fantasy and suspense elements in an appealing and readily-digestible fashion.

The movie opens with Susie Salmon (Saoirse Ronan) relating what her life was like up until that fateful day in December of 1973 on which she was savagely murdered by a neighbor, George Harvey (Stanley Tucci). She goes on to describe how despite Mr. Harvey’s leaving no tracks, her sister (Rose McIver) and father (Mark Wahlberg) eventually develop their suspicions about the eccentric loner. And after the detective (LeMichael Imperioli) assigned the case appears to lose interest, Mr. Salmon becomes very tempted to take the law into his own hands. 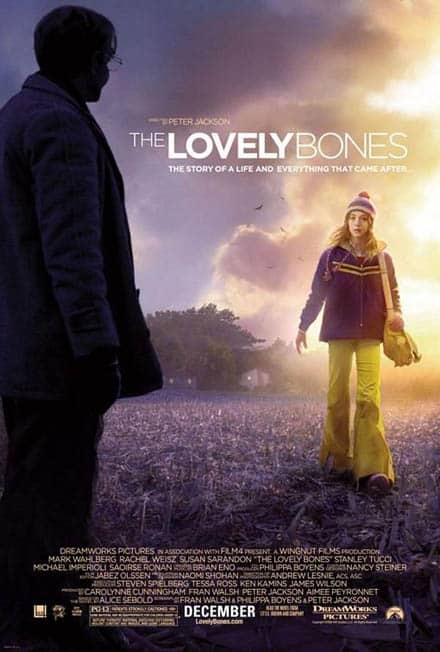 Meanwhile, we see how Susie’s passing has affected her mother (Rachel Weisz), grandmother (Susan Sarandon), little brother (Christian Thomas Ashdale) and friends. I’m not sure how the audience is supposed to experience all this, except with frustration, given that we were informed the identity of the real culprit at the outset but then have to watch helplessly as the police focus on innocent suspects such as Susie’s first boyfriend (Reece Ritchie).

More an overly-romanticized post mortem of a terrible tragedy than an edge of your seat crime thriller. As such, The Lovely Bones is likely to resonate more with female teens than with any adult demographic. An epic snuff flick which fails to engage the viewer on an emotional level.