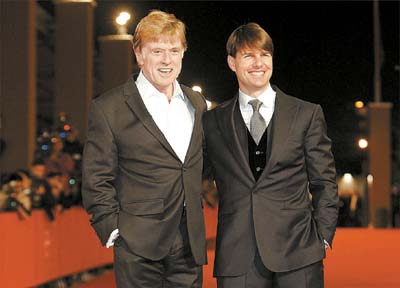 Unfolding as nearly a raw, gritty, highly stylized rough cut of itself, Robert Redford’s Lions For Lambs is a stinging reality-based dramatic tapestry of interwoven debates, touching on recent US foreign policy and its war on terror. The Robert Redford directed film makes its critical and indeed defiant point that life and death decisions about issues like war have concrete and irrefutable repercussions that stretch far and wide to various corners of the planet. Or perhaps as close by as the person right next to us, whom we may care for deeply.

The title is taken from a WWII German general’s comments expressing his admiration for the courage of British foot soldiers, while ridiculing their commanding officers: ‘Never have I seen such lions led by such lambs.’ The words are spoken in the film by Redford’s character, Dr. Malley, a former ’60s activist and idealistic professor at a West Coast university who is increasingly frustrated by the cynicism, materialism and complacency of the younger generation of students in his political science classes. Malley is also shocked and stunned that the moral convictions he tried to impart to his young charges has led two of his students of color, played by Derek Luke and Michael Pena, to sign up for the military to fight the war on terror. And their unit has been assigned to a dangerous secret mission in Afghanistan.

Meanwhile, the architect of that new plan is the brash and ambitious US Senator Irving (Tom Cruise). Irving has called in star DC reporter Janine Roth (Meryl Streep) to reveal limited hints about the mission without giving much away, attempting to manipulate the interview and dictate the story to what he hopes will be more a stenographer’s than a journalist’s ear, in order to produce the promo puff piece that will enhance his future bid for the US presidency.

But a clearly stressed and distraught Roth has long been jaded by the seemingly perpetual war on terror in which she herself feels a gnawing complicity as an initially compliant player in the media. Therefore, a heated political conversation between the two ensues rather than a conventional interview, and all sorts of controversial topics touching on the nature of present day government policies fire up the dialogue.

With references to Greek philosophy at hand and debates mounted among all the characters, it’s apparently Redford’s intention to spark political discourse in Lions For Lambs about the ailing state of the nation, and the sacrifice of its young to wars. Specifically, the drama is shaped in the manner of the dialectics of classical Greek philosophy and its ultimate intent, namely the search for truth. The weighty issues are at times delivered in too rapid a style to fully contemplate and digest, but their significance for an urgent and long overdue national debate is in no way diminished. In any case, Lions For Lambs tugs at the heart and mind, revealing as in a mirror a thirst for logic, compassion and truth, and stimulating a challenging exchange of competing ideas.