Picture a post-apocalyptic North America left devastated by a combination of fire, famine, drought and wars. The U.S. has collapsed only to be replaced by a centralized, totalitarian regime run with an iron fist by the President (Donald Sutherland) with the approval of effete elites barricaded inside the wealthy Capitol.

That pampered class remains blissfully insulated from the ongoing suffering of the citizens trapped in any of the country’s dozen outlying districts. For, since an attempted coup 74 years earlier, the government has been punishing the proletariat by staging an annual fight to the death in the wilderness in which each district is represented by a boy and a girl.

The 24 participants are chosen by lottery and, as the story unfolds, we find 16 year-old Katniss Everdeen (Jennifer Lawrence) consoling her younger sister, Primrose (Willow Shields), who has had the misfortune of having her name picked to represent District 12. However, Katniss altruistically volunteers to take her terrified sibling’s place, and soon finds herself shipped off by train to the site of the nationally-televised Hunger Games.

En route, she and fellow District 12 entrant, Peeta Mellark (Josh Hutcherson), are supposed to be mentored by former-winner Haymitch Abernathy (Woody Harrelson). But the fatalistic alcoholic only has discouraging words to share, warning them to, “Embrace the possibility of your imminent death, and know there’s nothing I can do to save you.”

Nonetheless, Katniss is determined to survive the ordeal, knowing just how much her sis and widowed mother (Paula Malcolmsen) might mourn her demise. Fortunately, the spunky tomboy already has a host of survival skills at her disposal, being adept at archery and camouflage.

Based on the first installment of Suzanne Collins’s popular trilogy of the same name, The Hunger Games is a riveting, if gruesome adventure which definitely will not disappoint its legions of loyal fans, a demographic every bit as rabid as readers of the Harry Potter and Twilight series. While this eagerly-anticipated cautionary tale of Orwellian dimensions does address a litany of timely themes ranging from greed to loyalty to exploitation to corruption, it nevertheless remains, at heart, a high attrition-rate, splatter flick designed to satiate the bloodlust of kids weaned on gory computer games.

How else would you describe a futuristic sci-fi revolving around a reality show where humans hunt humans they don’t even know purely for sport, spectacle and survival? The Most Dangerous Game meets Lord of the Flies.

Trailer for The Hunger Games: 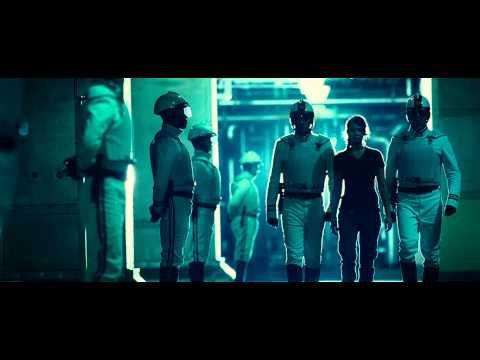