While we’re not exactly expecting morbid horror maven M. Night Shyamalan to have that giddy mass revelry in mind for The Happening that went along with the original last century definition of that particular term, it might have actually gone a long way to being the next best idea.

This numbing polemical morality tale in dreary doomsday thriller clothing is a surprisingly dull downer for all its mass panic attack high alert mode. And where M. Night (The Sixth Sense), once ruled with his breathlessly anticipated plot twist shockers, he may have reached a point where the yawner of a toxic mystery might simply lie in unintentionally boring people to death.

Originally titled The Green Effect, this latest M. Night disaster fare in more ways than one pits man against nature, and some possible mysterious toxin in the air that inexplicably creates a mass die-in where folks lethally attack themselves. A refreshing change-off, by the way, from the usual running around killing each other, no matter what type of genre.

But we’ve seen this sort of mind-rape gloom doom epidemic suicide before – in fact hitting theaters just this past week (hmm, to steal Night’s thunder?) in Dario Argento’s devil-made-me-do-it, gothic girl witches gone wild Italian style, Mother Of Tears. And not so long ago, a malevolent mother nature eco-freakout did humankind in while shopping, with Stephen King’s The Mist. Then there’s this film’s whole fright flight road movie mayhem that appears awfully borrowed from War of The World’s panic mode nomad, Tom Cruise. 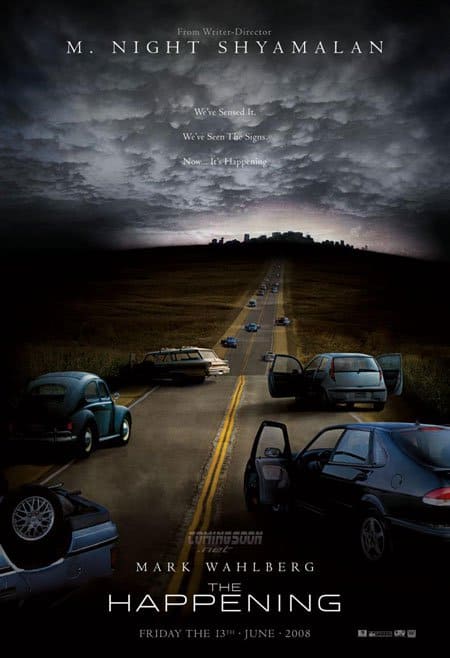 And while The Happening may be about some deadly airborne substance doing away with the human race, could be that Night’s script had a similar effect on its seemingly distracted cast. Mark Wahlberg as a worry wort high school teacher with the weight of the world on his shoulders, mopes his way through the movie like he’s already succumbed to the DOA script. And Zooey Deschanel as the conflicted spouse, looks fine but hardly dazzles. Whether it’s a wrong headed interpretation of the story or simply a side effect case of the dramatic blahs for much of this suspiciously underwhelmed ensemble, is a side dish mystery to the whole production that is anybody’s guess.

Walking though someone else’s worst nightmares, M. Night’s for instance, can be the most potent terror tactic imaginable in a movie. But hey, let’s keep the focus on making the characters miserable, not the audience.