This is a compelling murder mystery set in the heart of one of the most dysfunctional families in cinematic history, all of whom seem quite normal compared to the girl with the dragon tattoo. She is totally bizarre but at the same time endearing and somehow manages to give dysfunction a very good name.

Mikael Blomkist (Daniel Craig) is a Swedish investigative journalist and has just been sued by Wennerstrom (Ulf Fribrg) for libel, which has left him broke and humiliated. Before the dust settles, Mikael is contacted by Henrik Vanger (Christopher Plummer), who commissions him to find the person responsible for the presumed murder of his missing niece. Mikael needs an assistant and Henrik recommends the pierced and tattooed Lisbeth Salander (Rooney Mara), who can hack into absolutely anything, and frequently does. Mikael immediately recognizes her talents and the two set out to solve the mystery of the Vanger girl who disappeared 40 years before. 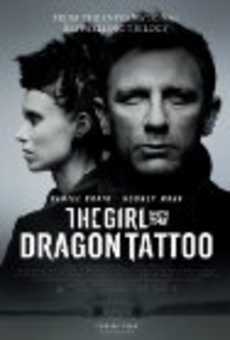 The opening scenes in this film are very confusing. Wennerstrom, who has nothing to do with the Vanger story, is one of the first characters we meet and his presence detracts greatly from the introduction of Mikael, his people and his world. There is also a lack of clarity when we are bombarded with the many members of the Vanger family, some by name, some physically and, when Lisbeth joins Mikael, it is an ideal time for a recap of the who and what but, alas, this golden opportunity is missed.

This film begins as being Mikael’s story but, once we meet his co-star, the action catches on fire and it is Lisbeth who keeps us intrigued as layer upon layer are peeled back, and it is with her we have that great ‘ah ha!’ moment . As the story grows, we get to know our unlikely hero well but what actually defines her is when she metes out some pretty dramatic justice of her own. It’s all extremely sick but she pulls it off with panache and, in the same moment, creates a David and Goliath fable that gives tattooing an altogether higher purpose.

As a remake of a Swedish production, it is a total mystery why this version was not set in the UK or US. Not only would this have given it a more authentic feel but it would also have saved the actors having to use fake accents, with the exception of Mikael, who doesn’t make even an attempt at a lilt. Which brings us to the greatest mystery of all. How did Daniel Craig get to be an A list actor when his dialogue in this is hit and miss and, when he misses, it sounds as if he’s reading the weather forecast in a hurry? Fortunately for him, however, both upcoming sequels largely feature Lisbeth, with him playing only a supporting role, so he won’t have to worry if she outshines him because, as the star, she’s supposed to steal the show.