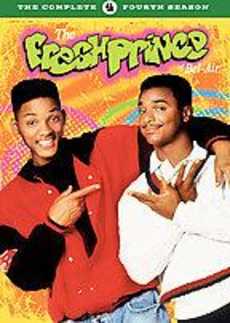 The fourth season of The Fresh Prince of Bel-Air finds Will (Will Smith) and Carlton (Alfonso Ribeiro) matriculating at the University of Los Angeles where the contrary cousins’ seem to have more interest in coeds than in any college curriculum. Besides returning regular cast members Karyn Parsons as Hilary, Tatyana Ai as Ashley, Joseph Marcell as family butler Geoffrey, and James Avery as Uncle Phil, the initial episode introduces Daphne Maxwell-Reid as a replacement for the character of Aunt Vivian. This new development is not lost on Jazz (DJ Jazzy Jeff), Will’s friend from the ‘hood, who remarks to her, “There’s something different about you.”

Among the celebs making special appearances during the 26 week series were Donald Trump and his ex-wife Marla Maples (For Sale by Owner episode), Playboy’s Hugh Hefner (Fresh Prince After Dark episode), America’s Oldest Teenager Dick Clark (The Philadelphia Story episode), Supermodel Tyra Banks (Take My Cousin… Please, plus several other episodes), Ben Vereen (Papa’s Got a Brand New Excuse episode), Robert Guillaume (You Better Shop Around episode), Boys II Men (Twas the Night Before Christening episode), Michael Rapaport (Where There’s a Will, There’s a Way episode), Robert Hooks (It’s Better to Have Loved and Lost It… episode), Robin Quivers (You’ve Got to Be a Football Hero episode), Branford Marsalis (Stop Will! in the Name of Love episode), John Witherspoon (The Harder They Fall episode) and Blaxploitation Era screen vixen Pam Grier and Elise Neal (both in the M Is for the Many Things She Gave Me episode).

But make no mistake, this 4-Disc DVD remains a Will Smith vehicle from beginning to end, capturing the eventual two-time Oscar-nominee at a stage in his career where his combination of charisma and perfect comic timing hinted at an enviable big screen career about to take off. Like a fine red wine, The Fresh Prince is a sitcom which only improves better with age.