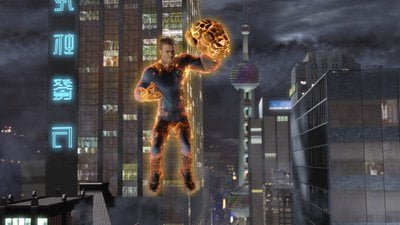 How do you take a team of beloved, comic book crime fighters with cool superhuman powers and turn them into absolute bores by the time they hit the big screen? That’s a question which can best be answered by Tim Story, director of The Fantastic Four: Rise of the Silver Surfer, since he’s achieved that improbable feat twice now. For this surprisingly-flat sequel proves to be just as dull as his first adaptation of the Marvel franchise back in 2005.

The quartet, which was ostensibly inspired by the classic Greek elements, air, fire, water and earth, is again led by the elastic Dr. Reed Richards, aka Mr. Fantastic (Ioan Gruffudd), a contortionist who has the ability to stretch, twist and re-shape his body. Then, there’s Sue Storm (Jessica Alba) who can turn herself invisible and also control force fields. Her brother, Johnny (Chris Evans), The Human Torch can fly and set himself afire. And The Thing (Michael Chiklis) is a rock-like mutant with incredible strength.

At the point of departure, we find Reed and Sue in Manhattan, making last-minute preparations for their impending marriage, blissfully unaware of extraordinary climate changes occurring elsewhere. They’re too distracted by the paparazzi and adoring fans to hear about the fact that it’s snowing on the pyramids in Egypt or that the seas encircling Japan have frozen solid. 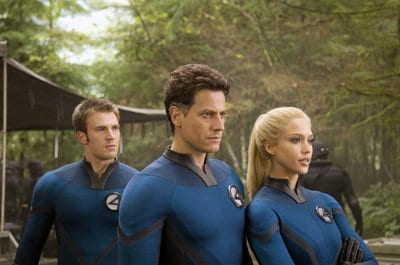 Only after weird weather triggers a blackout in New York and ruins the couple’s wedding day, does anybody pause to wonder what’s suddenly causing these atmospheric anomalies. Of course, they soon discover that it isn’t global warming at all, but the work of The Silver Surfer (played by Doug Jones and voiced by Laurence Fishburne). This intergalactic traveler is on a mission to Earth on behalf of Galactus, an evil entity that feeds on life-bearing planets.

The Silver Surfer is a virtually indestructible figure, provided he isn’t separated from his metallic surfboard, which is the source of his cosmic powers. He flies faster than the speed of light and can survive in outer space, so it’s clear that it’s going to take a concerted effort to match wits with and subdue this elusive villain bent on world domination.

Thus, at the suggestion of U.S. Army General Hager (Andre Braugher), the Fantastic Four reluctantly join forces with their recently-revived archenemy, the diabolical Doctor Doom (Julian McMahon). Unfortunately, the tortoise-paced adventure which ensues is a childlike insult to the intelligence which relies on pseudo-scientific claptrap which probably couldn’t convince a ten year-old of its merit. Further, despite the flick’s $130 million budget, its CGI-enhanced fight sequences are so tame and underwhelming that the movie was able to get away with a PG rating.

Inexplicably, directory Story remains determined to squander screen time on distracting sidebars developing his protagonists’ personal lives, including The Thing’s continuing relationship with his blind girlfriend (Kerry Washington) and Johnny’s being a ladies man. Of course, we have Sue and Reed’s nuptials, at which Fantastic Four creator Stan Lee makes a cameo appearance as a wedding crasher. 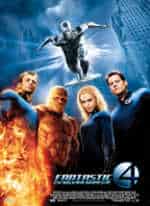 That clever aside can’t save Fantastic Four 2 which amounts to the worst comic book adaptation since, well, since Fantastic Four 1. An unimaginative disaster that takes forever to end, as if the celluloid is being stretched by Mr. Fantastic to make the movie last ten times longer than ninety minutes.