While Tyler Perry has tended to utilize melodrama in his movies to push his far from subtle brand of religious sermonizing, with The Family That Preys, his sitcomish lecturing has lightened up in a bid to cross over into more intriguing race and class territory. Which makes for broader though by no means deeper themes and concerns.

The Family That Preys begins with a wedding suggesting a backdrop undercurrent of brewing tensions among kin, and jumps abruptly to four years later, when these long simmering hostilities are about to hit the fan. Alfre Woodard is Alice, an older single mother who presides over a rundown Atlanta diner, Wing And A Prayer, and still frets over her two bickering married daughters. Pam (Taraji P. Henson) works at the diner and lives a modest but content existence with her construction worker spouse, Ben (Tyler Perry). Sister Andrea (Sanaa Lathan) is a smug, ambitious highly paid corporate financier and mother of a young boy, whose husband Chris (Rockmond Dunbar) works in a hardhat alongside Ben.

But because Andrea has attained a much higher social and economic class than her family and Ben, she looks down on all of them. In particular her blue collar spouse, who seems to unbelievably be completely unaware that Andrea is openly denigrating him, or that she’s sleeping on the sly with her white married patrician boss, William (Cole Hauser). William also happens to be the ingrate son of Alice’s odd couple best friend, the ditzy and filth rich Charlotte (Kathy Bates). It seems that the two women embarked on a lifelong friendship after Charlotte’s ruthless urban developer husband at the time was engaged in some determined urban removal downtown, and Alice refused to budge to let them knock down her diner. 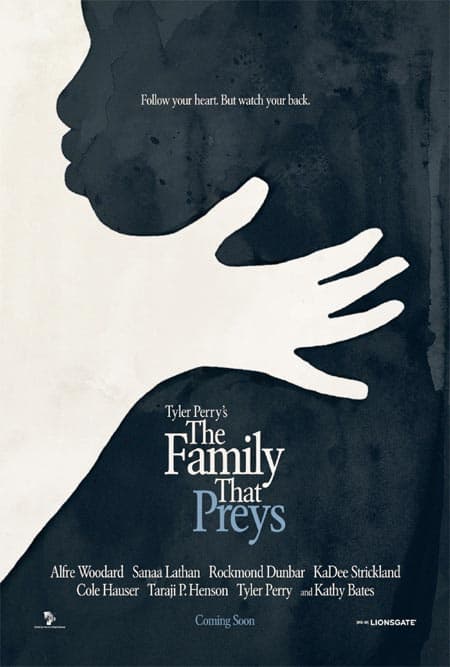 And when Charlotte shows up one day in a vintage 1950s convertible she just acquired, insisting the two pals take off for a cross country adventure, it’s as if she weirdly just stepped off the set of that all girl road movie Bonneville, after perhaps dropping off Jessica Lange and Joan Allen to embark on yet another impulsive journey. Also a little disorienting is that this is Atlanta, but these two senior moms are the only ones in the movie with Southern accents.

Meanwhile, suspicions steadily mount, though in decidedly slow motion, about these multiple marital betrayals in the works. And this while nearly everyone, including Charlotte’s corporate hotshot sidekick (Robin Givens), for some odd reason doesn’t seem to have a clue.

But when Perry gets around to meting out assorted punishments to stock villains, as he inevitably always does, let’s just say that the two people who gets their butts most royally kicked, are the actors who cross interracial lines here. I can’t say for sure whether this is by coincidence or design, but the fact that one of these acts of violence is an assault on a battered woman and is intended to spark a spontaneous audience laugh track, generates quite a few hunches.

And though one emotionally wounded party in all of this sudsy mayhem, the betrayed hubby, gets to reclaim his dignity by walking out on a toddler who turns out not to truly be his own, the real question is, how can a child of whatever DNA be so casually and thoughtlessly abandoned by the only father he’s ever known, just so Tyler Perry can make his moralistic point? Religious piety and family values, indeed.