Well, actually it’s two eyes, to be exact, as celebrated blind LA concert violinist Sydney Wells, played by Jessica Alba, gets a double corneal transplant and a hopeful new life, as a woman with restored vision lost in childhood, in The Eye. Though hardly a bad looker herself to begin with, so to speak, Alba’s brand new insight into the world around her here, leaves much to be desired, and more.

At first the movie – a remake of the 2002 Hong Kong hit thriller Jian Gui – is less than eye opening, and more an extended, plodding voiceover excursion into the differently experienced world of blindness, in the nature of the blind leading the bland. But after far too repetitious squinting, gasping and a deliberate out of focus camera’s eye where we more than get it, co-directors David Moreau and Xavier Palud finally decide it’s high time to switch it up to something moodier, creepy and pretty scary. 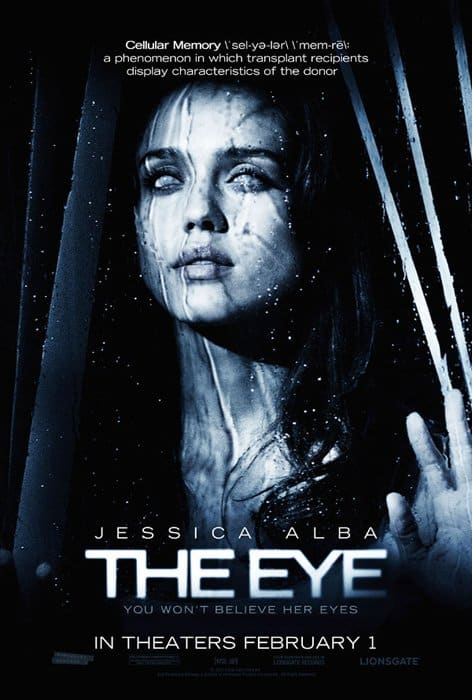 For much to her chagrin, Sydney begins to experience in nightmares, the traumas that consumed her mystery organ donor. As these supernatural visions increasingly take control of Sydney’s waking life, ghosts turn up who stroll in and out of her world, victims of grueling deaths on their way to being escorted to the afterlife by what looks like a bunch of identical anorexic and malevolent demons.

Offering begrudging assistance is her eye specialist Dr Faulkner (Alessandro Nivola), a facetious hunk filling in as a kind of itinerant shrink as well, for a patient who is gaining her sight but losing her mind. So even though revealing the identity of the donor is a hospital policy no-no, the two are soon driving to Mexico to track down the Good Samaritan with an apparent second life inside Sydney’s seriously discombobulated head.

To give away much more might compromise this terrifying treat, but somewhat less than satisfying finale, for those horror junkies with hyperactive morbid curiosity. Suffice it to say that the nervous wreck protagonist picks up some fairly nifty visionary skills, while being attacked by apartments and restaurants, and dealing with a bad case of occult organ rejection,

There is one odd comic moment in the movie when Alba, a Latina into pulling off an ethnically ambiguous role here, asks her gringo doc to translate Spanish into English for her down in Mexico. And on a likely unrelated note, at least her corneas weren’t the result of that thriving Third World involuntary organ donor black market. But a clue to this supernatural mystery may also possibly lie in the NAFTA Trade Agreement virtual slave labor factories south of the border, a horror story in its own right.