When Charlie Banks (Jesse Eisenberg) was growing up in Manhattan, he witnessed a brutal beating doled out by a pal named Mick (Jason Ritter) that left another kid looking like death sucking on a Lifesaver. Mick was a hot-headed Irishman who was quick to settle differences with his fists.

Because Charlie hailed from a well-to-do family, while the beefy bully came from a blue-collar background, it was reasonable to expect that they’d never see each other once they went their separate ways upon graduating from high school. After all, Charlie was headed out of town to Brown University to enjoy the all the privileges afforded by that exclusive enclave.

The reticent freshman was making his adjustment to life on campus when, lo and behold, who should show up in Providence unannounced but Mick. The creepy criminal decides to stay, like a latter-day Hank, for anyone familiar with that short-lived TV sitcom from the Sixties about a college drop-in. Although this doesn’t sit well with Charlie, he’s still too intimidated by this manster with anger management issues to summon up the strength to ask him to leave. 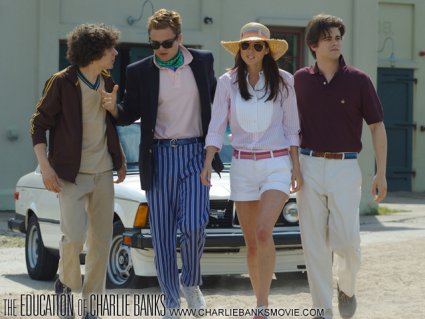 So, not surprisingly, a similar dysfunctional relationship soon develops to the one they had back in New York. This means Mick not only steals Charlie’s very obliging girlfriend (Eva Amurri) but beats the crap out of any nerds he hangs with.

Since I happen to have attended Brown and this film was shot on location, it had me both feeling nostalgic and wondering how plausible a scenario I was watching. Perhaps times have changed, but it strikes me as highly unlikely that any Ivy League school would put up with such nonsense from a matriculated student, let alone from an intruder with a rap sheet and a violent streak.

Nonetheless, The Education of Charlie Banks is entertaining enough, provided you buy into the idea that even eggheads can relate to a rude rebel without a clue. The movie technically marks the directorial debut of Limp Bizkit front man Fred Durst, whose other flick, The Longshots, was released first, though made second.

In sum, if you’re at all intrigued by the idea of exploring angst and anomie among the entitled upper crust, then this Ivy League variation on Fight Club just might satiate an effete brand of bloodlust.

To see a trailer for The Education of Charlie Banks,